US should invest in SPACE! 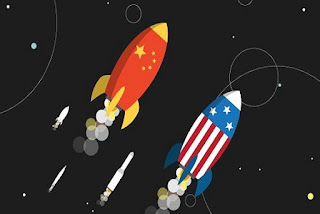 
When most people think of space exploration, they connect it with Cape Canaveral or Houston, but Oklahoma actually plays a pivotal role in advancing our country’s space posture. That’s because Oklahoma’s own Senator Inhofe (R-OK) serves in a key role in Congress as the Chairman of the Senate Armed Services Committee. In his leadership role, Senator Inhofe has been championing our country’s need to expand our footprint in space, including supporting the creation of Space Force under the U.S. Air Force (USAF). Both Senator Inhofe and President Trump know that space is the next frontier - and that it’s already a contested environment. When Neil Armstrong took those first “small steps” on the moon, he solidified America’s victory in the space race. But we are in a new era of space utilization, and threats from other countries like China and Russia, are rising every day. That’s why it’s important we invest today in order to maintain our dominance.
To achieve this, the United States must invest in innovative aerospace technology. The government needs to take a farsighted view and take well-calculated risks. Once a project secures an investment, it must be completed, because kick-starting innovation requires patience and a willingness to see promising and viable ideas come to life. Unfortunately, that’s not what’s happening today.
The USAF realized that to ensure we had assured access to space for spy satellites we needed to be able to easily get to space. We no longer want to rely on Russian-made RD-180 engines. So they created the Launch Service Agreement program (LSA). And, in a brilliant stroke, decided to invest upfront in cutting-edge projects to foster competition to develop new launch vehicles - the first to be created in decades. They also required private industry to put hundreds of millions of their own dollars on the table in order to compete to be a part of this program. Three companies were selected and now these three companies are working on viable launch systems to provide high-quality launch services - on American made rockets - to the USAF.
However, just because the Air Force invested in a new program to stay ahead of the competition, it doesn’t mean that the government procurement process has kept up. Now, because of an outdated procurement strategy, the Air Force wants to cut off the development funds before the benefits have been fully realized. The USAF has already spent hundreds of millions of dollars in conjunction with these private companies to develop launch vehicles and their required infrastructure. To stop the funding now would hinder innovation and squander investment of all that hard-earned taxpayer money. This also risks forfeiting vast sums of private investment that benefits the taxpayers.
That’s why leaders like Senator Inhofe must step forward to protect this investment. Senator Inhofe has consistently fought to protect every dime of taxpayer money and to ensure the United States continues to win the next era of the space race. It stands to reason that he would be a perfect voice to fight to protect a program that does both - ensures our continued dominance in space while responsibly using taxpayer dollars.
Posted by Steve Fair is a Jelly Salesman. at 8:38 AM