RNC has lost its objectivity! 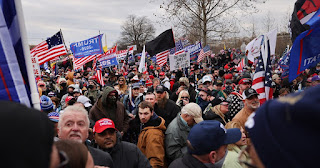 What a week! On Wednesday, a joint session of Congress convened to certify the 538 Electoral votes in the 2020 presidential race.  Outside thousands of President Trump supporters gathered for a rally.  After being warmed up by Eric and Donald Jr, President Trump spoke to the passionate crowd just as the proceedings in the House chamber started.  “We will never give up; we will never concede. We will stop the steal. We’re going to walk down Pennsylvania Avenue, and we’re going to the Capitol…We’re going to try and give our Republicans, the weak ones…the kind of pride and boldness that they need to take back our country.”  After the Electoral votes for Arizona were challenged, the two chambers went into debate.  At that point, several hundred of the crowd breeched the security blockades and begin to push their way into the Capitol.  Some took to breaking windows out of the Capitol and crawling into the building.  An Air Force combat veteran was shot and killed by Capitol police crawling through a broken window.  Lawmakers were rushed to secure locations and tear gas was used on those inside the Capitol.  It took until late in the evening to clear the Capitol and get Congress back in session.  The National Guard was called out and set up a perimeter around the Capitol.  At 3:30am, Vice President Mike Pence announced that Joe Biden was the winner of the 2020 president election. Four observations:

First, there is no justification or excuse for desecrating the U.S. Capitol.  Video of people hanging from the gallery balcony or sitting in the Speaker’s chair were disturbing and showed incredible disrespect for the building.  It made America look like a third world country.  Breeching security should result in consequences and it appears many have already been charged.

Third, the Trump supporters are a persistent, dedicated group.  Some call them crazed- others committed, but clearly they are not going away.  Elected official’s actions in the coming days are going to be under more scrutiny than in the last 50 years.  That is a good thing and people paying attention to their government- at all levels- will improve it.

Fourth, Trump is not going away.  Like it or not, he has maintained control over the national GOP.  His handpicked Chair and Vice Chair at the RNC were reelected in Florida, two days after the riot at the Capitol.  Donald Trump Jr. screamed, “This is Donald Trump’s Republican Party,” at the Capitol rally and it appears he was absolutely right.  The RNC will be nothing more than Trump’s PR and fundraising arm for the next four years.  That is unfortunate because the primary job of the national Party(Party leadership at all levels) leadership is to ‘conduct fair primaries’ and to help get the GOP nominee elected, not tilt the process to favor one candidate.  When they do that, they lose all creditability with other Republicans.  By keeping the Trump team intact at the RNC, it sends a message the fix is in for 2024.

May God have mercy on America.  Only He can heal this broken nation.

Posted by Steve Fair is a Jelly Salesman. at 2:50 PM