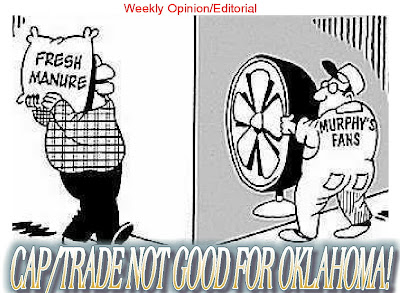 The U.S. House on Friday passed a historic bill on Climate Change aka the Cap and Trade bill. Passage of the bill gave Speaker Pelosi (D-Calf.) one of her biggest victories ever. The bill squeaked by on a vote of 219-212. Eight cowardly Republicans joined 211 Dems for this massive tax increase bill marketed as a bill to protect the environment. Forty-four courageous Democrats did vote no, in spite of unbelievable pressure from their leadership.

Democrats even flew Patrick Kennedy (D-RI) back from drug and alcohol rehab to vote because 217 votes were needed for passage and it looked as if the party boy’s vote might be the difference maker. During the 15 minute vote, Pelosi had to sneak to the back of the House chamber and persuade two “undecideds” to vote yes.

The Speaker had last-minute conversations in the rear of the chamber with Reps. Joe Baca (D-Calif.) and Henry Cuellar (D-Texas). Cuellar had even turned down President Obama in a one-one-one phone call Thursday, but obviously the Speaker was more persuasive. Cullellar will pay the price in 2010 by voting yes. He represents a southern congressional Texas district heavily dependent on oil and gas exploration. His constituents will remember this vote.

After passage, Pelosi walked into a press conference holding an "easy button" from the Staples store advertisements and said, “That was easy.” "No matter how long our colleagues want to delay, they couldn't hold off the future," Pelosi said. Pelosi’s flippant attitude showed she is either clueless or uncaring on how Cap/Trade will impact the American consumer.

Pelosi called the bill one about "jobs, jobs, jobs, jobs." She is right about that, but not with the result she is taunting. The Marshall Institute concluded that estimates of job losses attributable to cap-and-trade would range in the hundreds of thousands, most going out of the country.

Using his privilege as minority leader to speak for an unlimited time on the House floor, John Boehner (R-Ohio) spent an hour reading a 309-page amendment at three in the morning right after the amendment was filed. When asked why he did it, he responded, "Hey, people deserve to know what's in this pile of s--t." Pelosi's office declined to comment on Boehner's jab. But one Democratic aide quipped, "What do you expect from a guy who thinks global warming is caused by cow manure?" But cows are the source of global warming according to the UN.

The United Nations released a report that identified the world's rapidly growing herds of cattle as the greatest threat to the climate, forests and wildlife. The 400-page report by the Food and Agricultural Organization, entitled Livestock's Long Shadow, also surveys the damage done by sheep, chickens, pigs and goats. But in almost every case, the world's 1.5 billion cattle are mostly to blame. Livestock are responsible for eighteen per cent of the greenhouse gases that cause global warming, more than cars, planes and all other forms of transport put together. Evidently the political parasite(aka aide) was absent the day the report came out.

Boehner said, “Speaker Pelosi’s national energy tax is a bureaucratic nightmare that will cost families more than ever for electricity, gasoline, food, and other products, and cost millions of American workers their jobs. This is a tax on anyone who drives a car, buys an American-made product, or flips on a light switch.”

Cap and Trade must not make it into law for two very simple reasons. First, it creates a “permanent” tax on energy products that will hurt America families for years to come. As the Marshall report pointed out, the impact on working families will be substantial in prices at the pump, on their electric bill and on heating fuel. Second, Cap/Trade will cost us jobs in Oklahoma. Capital is a coward and will flee a hostile environment to one where it can flourish. Cap/Trade is hostile to oil and gas producers and therefore to the consumer. Democrats don't understand businesses do not "absorb" tax increases, but pass them on to the consumer.

Boehner’s description of this bill was somewhat course and lacked eloquence, but he was right!