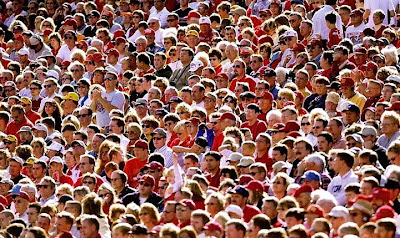 ONE AT A TIME PLEASE!
by Steve Fair
Article 5, Section 57 of the Oklahoma State Constitution, states, ‘Every act of the legislature shall express but one subject, which shall clearly be expressed in its title.’ The provision is commonly called ‘the single subject rule.’ The provision’s stated purpose is to insure the citizens of Oklahoma are not confused by legislation. For example at the federal level, often times an ‘Omnibus bill’ is passed that has something in it totally unrelated to the title of the bill. The ‘single subject’ rule was enacted to prohibit such deceit and the practice known as ‘logrolling.’
*****
When Democrats were in control of the Oklahoma legislature- 1907-2004- they regularly passed legislation that had multiple subjects and whose title did not accurately reflect the actual legislation. During that time, state courts largely ignored the ‘single subject’ rule. That is why is so puzzling Oklahoma courts have just recently started to enforce the ‘single subject’ rule since Republicans gained control of the state legislature in 2004.
*****
In 2008, the legislature passed a pro-life bill (Freedom of Conscience Act) that had several different provisions. Bear in mind, all the legislation was related and was pro-life, but it covered a variety of different areas. The state supreme court said it violated the ‘single subject’ rule and struck it down. One has to think it more than mere coincidence this happened on a pro-life bill. This year, the State legislature spilt the bill into two bills and passed them overwhelmingly. One bill, written by Senator Anthony Sykes, (R-Moore) would require women to undergo an ultrasound and listen to a detailed description of the fetus before they undergo an abortion. Several other states have similar ultrasound pro-life laws, so this is not unique legislation.
*****
Governor Henry vetoed both bills as expected, but the legislature overwhelmingly voted to override the Governor’s veto. Because the measure had an ‘emergency’ clause, it was required to get ¾ of the legislature, not the normal 2/3 to vote to override the Governor’s veto. Several conservative pro-life Democrats joined with Republicans to override the veto- a true bi-partisan effort.
*****
Within hours, the courts had placed a restraining order on implementation of the new laws. A hearing is scheduled in July. Unlike the last delay in implementation, this lawsuit was not filed based on the single subject rule. Filed by an abortion provider, the suit claims the ultrasound measure is unconstitutionally vague, violates women's and abortion practitioner's constitutional speech rights, is an impermissible special law, and "impermissibly burdens the fundamental rights of plaintiffs' patients to terminate a pregnancy and avoid unwanted speech in a private setting."
*****
What about the rights of the unborn child? Shouldn’t they have the right to life, liberty and the pursuit of happiness? Now back to the single subject rule.
*****
Senate Pro Tem Senator Glenn Coffee, (R-OKC) has authored Senate Bill 213, which requires every bill to contain a separate provision that clearly expresses the subject of the bill. That means future legislative bill titles will be longer and will have subtitles outlining specifically what that each tenet in the bill is about.
*****
Pro Tem Coffee explained that SB 213 resulted from the court ruling that found the Freedom of Conscience Act, was unconstitutional because it violated the single subject rule. As a result, SB 213 now requires a court to provide written findings detailing each of the multiple subjects in a bill if the court finds the measure to violate the one subject rule.
*****
“Senate Bill 213 creates a legislative record that a particular piece of legislation has been debated and defended, in committee and on the floor, regarding its single subject,” said Coffee. “Regardless of what subject matter a bill deals with, this legislation will create a way for courts to give us guidance in how to improve legislation, by citing specific areas we did not comply with Oklahoma law.”
*****
Senate Bill 213 now goes to the House of Representatives where it is expected to pass. Who knows if Governor Henry will sign or veto it. Henry has become progressively more liberal as he winds down his two terms as Governor. Thanks to Senator Coffee for authoring legislation that will address the ‘single subject’ provision. Keeping courts out of ‘lawmaking’ and/or legislating from the bench is a good thing. We have enough of that at the Federal level.
Posted by Steve Fair is a Jelly Salesman. at 11:37 AM