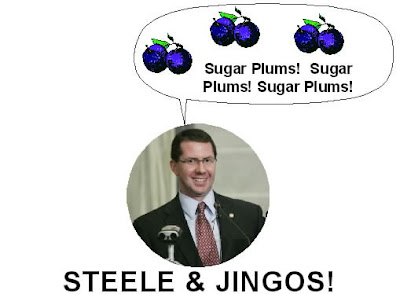 by Steve Fair
JINGO: ‘One who vociferously supports one's country.’
The Oklahoman’s editorial this morning (http://newsok.com/how-house-leader-get-his-wish-for-focus-on-substance/article/3519085?custom_click=headlines_widget) attacking ‘the right fringe’ of the House GOP caucus borders on blasphemy. It also reveals they are out of touch with their readership and clueless on what will move Oklahoma forward.
*****
The editorial attacks so called ‘jingo’ bills as legislation that is unnecessary and irrelevant. Most of these so called ‘jingo’ bills are the ones that define who we are and what we stand for. Jingo activists have been the driving force of why Oklahoma has a Republican majority in the legislature and Republicans in all the statewide elected offices. Jingos are why Oklahoma has the most conservative congressional delegation in Washington. Jingos are capitalists who provide jobs for hard working Oklahomans. They buy papers out of the racks (that only work half the time), and purchase advertising. Jingos are principled, ethical people who want to leave the state in better shape than they found it.
*****
The Oklahoman seems intent on pushing a policy of ‘governing from the center.’ In recent op/eds, they have encouraged incoming Speaker of the House Kris Steele, (R-Shawnee) and incoming GOP statewide elected officials to be pragmatic and to not get bogged down with ‘jingo’ issues and to concentrate on economic development in Oklahoma.
*****
What they fail to understand is that economic and moral issues are linked. Henry Hazlitt, an American economist and Wall Street Journal writer, said “Economics and ethics are, in fact, intimately related. Both are concerned with human action, human conduct, human decision, human choice… There is hardly an ethical problem, in fact, without its economic aspect. Our daily ethical decisions are in the main economic decisions, and nearly all our daily economic decisions have, in turn, an ethical aspect.”
*****
In 'The Inseparable Link between Morality and Economics' (http://jpatton.bellevue.edu/biblical_economics/morality-economics.html) published in 1992 by the Bellevue University Economics Department, author, Dr. Judd Patton wrote: “Economic principles reveal cause and effect relationships and simultaneously “tell” mankind what he ought to do or advocate because they are in harmony with moral precepts, The Ten Commandments. Our conclusion is that morality and economics are components in one indivisible body of science.”
*****
In his well known book entitled, The Truth About the Great Depression, Dr. Hans Sennholz said: “In God’s world, causes and consequences are connected logically. To offend against an economic principle, or to disobey an ethical commandment is to suffer the inexorable consequences of our action… His eternal laws and principles invariably exact a price for all offenses.”
*****
The right ‘jingo’ bills will foster a climate of moral and economic development. Ignoring the Creator of heaven and earth in legislation will guarantee moral and economic failure.
Posted by Steve Fair is a Jelly Salesman. at 8:38 AM