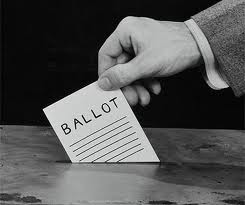 CANDIDATES MUST VOTE!
by Steve Fair

Wednesday is the first day that candidates can file for office. Candidates for offices from county to state and federal level will have until Friday to toss their hat into the ring. County offices up for election this cycle are Sheriff, County Clerk, Court Clerk, and District 2 County Commissioner. All 101 State Representatives and 24 of the State Senators (odd numbered districts) in Oklahoma will be voted on in November. Oklahoma only has two statewide offices up for election- both Corporation Commissioner races. All U.S. congressional seats(435) nationwide are up for re-election. Filing for county offices will be at the local county courthouse. Filing for state and federal races are at the State Capital in Oklahoma City.

*****
Why do people run for office? Obviously the reasons vary. Some genuinely want to make a difference in government. Others run to make sure one issue is either passed or defeated. Some like the power of the position. Still others have a family connection to politics- ie Bushes, Kennedys, Borens. Then there are those that are genuinely interested in public affairs. No matter what their motivation, all candidates, regardless of political affiliation, should be admired for their willingness to put their time, talent, treasure and energy into a campaign.

*****
What blows my mind is when a political candidate files for office who doesn’t vote or votes infrequently. Take for example Meg Whitman, the Republican candidate for Governor in California in 2010. Whitman, who is the former CEO of E-bay, didn’t register to vote until she was 46 years old and had NEVER voted before she filed to run for Governor. When her apathy was exposed Whitman said, “The reason is, is for many years, I wasn't as engaged in the political process and should have been." Whitman lost the race by eleven points to liberal Jerry Brown who used Whitman’s lack of voting as an effective tool against her.
*****
Democrat Jon Corzine lost his battle for a second term as governor of New Jersey to Chris Christie in 2010. One of the reasons was Corzine had to overcome the fact that he hadn't voted in a Democratic primary since 1988 and had missed three general elections in that time when he first ran for the Senate in 2000. Christie effectively exploited Corzine’s lack of interest in participating in the process with faithful voters.
*****
Perhaps the best example of a candidate not voting before being a candidate is President Zachary Taylor. Taylor was elected President in 1848 as the Whig nominee. Taylor was a war hero and bragged that he had never cast a vote for President before he ran. He was politically naïve and his administration was marred with controversy. Taylor died in office after just sixteen months.
*****
Why don’t people vote? According to the California Voter Foundation twenty eight percent of infrequent voters and twenty three percent of those unregistered said they do not vote or do not register to vote because they are too busy. That implies those who do vote are not busy, right? That is a lame excuse and with in-person absentee balloting available in Oklahoma, which allows voters to vote on the Friday, Saturday or Monday before the election, there is no excuse to not exercise your right to vote.
*****
The survey also found that nonvoters are disproportionately young, single, less educated and more likely to be of an ethnic minority than infrequent and frequent voters. 40 percent of nonvoters are under 30 years old, compared to 29 percent of infrequent voters and 14 percent of frequent voters.
*****
How and who a person votes for is not a matter of public record, but whether they show up to vote is a part of the public record. Every political candidate for every office should be ‘required’ to publish their voting history for the public. One of the best measures of a person’s interest in political issues is if they vote. Candidates should be willing to explain why they didn’t show up to cast their ballot. It is inconsistent, hypocritical, and egoistical for someone who NEVER saw the importance of voting to become a candidate for elective office. Candidates/elected officials should be an example of the importance of voting.
*****
Founding father Samuel Adams said, "Let each citizen remember at the moment he is offering his vote that he is not making a present or a compliment to please an individual--or at least that he ought not so to do; but that he is executing one of the most solemn trusts in human society for which he is accountable to God and his country. "
Posted by Steve Fair is a Jelly Salesman. at 9:07 AM