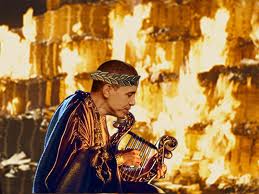 OBAMA FIDDLES WHILE BURNS!
by Steve Fair
and other parts of the western half of the U.S. are experiencing one of the worst wildfire seasons in over a decade.  In late June, the fast-moving fire near nearly doubled in size overnight, forcing as many as 32,000 residents to be evacuated.  At one time, the fire threatened part of the U.S. Air Force Academy campus, claiming nearly ten acres close to the facility  The Academy’s Fire Chief, Ernst Piercy, told the official U.S. Air Force website: ‘This is absolutely the worst wildfire I’ve ever seen.’
*****
President Obama went to to tour the fire-damaged areas on June 29th.  He said, “I think what you see here is an example of outstanding coordination and cooperation between federal, state and local agencies. We have been putting everything we have into trying to deal with what’s one of the worst fires that we’ve seen here in . And it’s still early in the fire season, and we still got a lot more work to do. But because of the outstanding work that’s been done, because of not only the coordination but also some unprecedented arrangements that have been made with military resources combined with the civil resources, we’re starting to see progress.”
*****
While the President did resist the urge to call the fires- Bush- fires, his statement about federal agency coordination and his administration ‘doing everything they can to fight the wild fires' is not completely accurate.
*****
Take for example, a company called Aero Union, founded in 1960.  Aero converted military aircraft to aerial firefighters and operated some of their planes under contract with the federal government.  For years the company had a fourteen million dollar annual contract with the U.S. Forest Service to provide airtankers- P-3 Orions-  for wildfire control, but on July 29, 2011, the U.S. Forest Service terminated Aero Union’s contract saying safety inspections were not being completed.
*****
"Our main priority is protecting and saving lives, and we can't in good conscience maintain an aviation contract where we feel lives may be put at risk due to inadequate safety practices,” Tom Harbour, director of the Forest Service’s Fire and Aviation Management program said. “This contract termination notwithstanding, we possess the aircraft support needed for this year's fire season." Oops, you may have not anticipated a record years for wildfires Tom!
*****
Shortly after they lost their contract, Aero Union laid off sixty workers and declared bankruptcy.  Bear in mind, Aero Union’s airtanker planes were FAA worthy, but did not meet the standards for the USFS.  Following the logic of the federal government, the planes could be used to transport people, but not fire retardant?  That makes no sense whatsoever, but then again, it’s the government.
*****
So which federal agency should be certifying aircraft as airworthy- the FAA or Smokey Bear?    I would prefer a guy with a degree in Aerodynamics, not Forestry.  It would seem this is a classic illustration of no federal agency coordination.   In the meantime, airworthy planes equipped and ready for firefighting service are sitting on a runway in while people’s home and businesses are burning.
*****
To add insult to injury, the Mobile Airborne Fire Fighting Sytems (MAFFS) - which retrofits C130 Aircraft for use as fire fighting aircraft was build and supported by Aero Union.  So when the Brain Trust at the Forrestry Service pulled the plug on Aero Union, they also pulled the plug on the company that built the equipment that pretty much made up the rest of the large air tanker fleet.  Now the MAFFS is no longer being built, spare parts are no longer being built, and the intellectual property that underlies the MAFFS is tied up in Bankruptcy.  One C-130 crashed in the past couple of weeks, one MAFFS lost . . .
*****
But wait, it gets better, with no logical replacement available for the P3 Orion or the C130 as airborne tankers, guess where the USFS is looking for replacements- try Russia!   http://fireplanes.wordpress.com/2012/04/20/iab-evaluating-beriev-be-200-air-tanker-in-russia/  How do you say "Outsourcing" in Russian?  The answer:  аутсорсинга.  How do you say hypocrite in politics?  OBAMA!
*****
President Obama’s administration should be explaining to the American public what they haven’t done about the wildfires.  The Obama administration’s conflicting policies put a sixty year old aerial firefighting company out of business, costing sixty people their jobs.  Their conflicting policies kept fire fighting planes on the ground when they could have been used to help fight the wildfires that were destroying homes and businesses.  The lack of foresight by the USFS has placed in jeopardy property and lives.  They shouldn't be talking about outsourcing jobs when they are trying to buy planes from the Russians.
*****

When he was running for President in 2008, Obama attacked President Bush’s policy on fighting wildfires and  said, “As President, Barack Obama will aggressively pursue an effective fire prevention plan that decreases the fire risks to communities.”  His whole 2008 campaign wildfire policy is available online at http://obama.3cdn.net/4c3532cf6695d7eb42_j8amvy80e.pdf. Oops!- that policy didn’t go quite as planned.   Because of his administration’s inability to use simple common sense, thousands of American families’ homes burned down.
*****
Popular legend claims that Roman emperor Nero played the lyre and sang while was burning in 64 AD.  It appears President Obama may be tuning his fiddle and his voice for the big BUSH(GOP) fire coming in November.
*****
President Obama recently has been attacking Mitt Romney for saying he built a business.  Obama said,  "If you have a business you didn't build that . . . you had help along the way . . ."  The full text of Obama's speech is available here
http://www.washingtontimes.com/blog/watercooler/2012/jul/15/picketvideo-obama-if-youve-got-business-you-didnt-/ .  My question is if your aerial tanker business was destroyed and 60 people lost their job and hundreds of thousands of acres burned....who HELPED with that?