Right to Work has been good for Oklahoma! 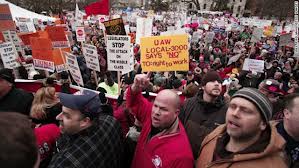 RIGHT TO WORK HAS BEEN GOOD FOR OKLAHOMA!
by Steve Fair

The Michigan legislation will prohibit workers from being forced to pay mandatory dues to labor unions in order to gain employment.  Without compulsion to pay union dues, union membership, revenue, and strength decline.  In other words, when a worker is given a choice, a significant number choose to not join the union.

The labor unions in Michigan reacted with violent protests, even storming the capital building in Lansing. Union educators walked out of schools and Democrat state senators walked out on the final vote.  Union workers and the Democrats believe the transition from a "closed shop" state to a right-to-work state will kill the unions in Michigan.  They may be right.  This is the second defeat to Michigan's organized labor interests in two months.

The first defeat came when Michigan defeated a state question on the general election ballot that if it had passed would written collective bargaining into the state constitution and outlawed a right to work law.  Proposal 2 was defeated 58% to 42%.  According to Republicans in Michigan, Proposal 2 was defeated because the unions had outlived their usefulness and have deviated from their original purpose.  Many unions now have become powerful special interest/lobbying groups rather than true representatives of workers' rights.

On Monday, before the state legislature passed and the Governor signed the right to work law, President Obama went to Michigan to campaign against the bill.  He said, "These so called right to work laws, they don't have to do with economics -- they have everything to do with politics. What they're really doing is trying to talk about the right to work for less money."  The president went on to say that strong unions build a strong America.  Understand that two thirds of union workers vote straight Democrat so it makes sense the president would support his base.

But an important question to ask is why are union states passing Right-to-Work laws?  It’s probably because union workers are tired of losing their jobs because employers refuse to operate, relocate or expand in a non right to work state.  Michigan has been losing population and jobs for over twenty years and right to work states are doing better than those who are not right to work.

Mark J. Perry, from the American Enterprise Institute, says that in the past three years right to work states have created four times as many jobs as states where they have closed union shops.

Oklahoma passed right-to-work in 2001.  During the campaign for the ballot initiative, I wrote a brochure that was widely distributed across the state entitled, “The Grapes of Wrath continues…”  At that time college graduates were fleeing Oklahoma to Texas and other states for better paying jobs.  Companies were refusing to relocate and expand in the Sooner state because we didn’t have right to work.  We were exporting our most precious resource- our kids and grandkids.

Since the passage of right to work, Oklahoma’s ranking among the states in per capita income has risen from 47th to 32nd.  According to the US Commerce Department, per capita income in the Sooner state is now $37,679.   In the ten years since Oklahoma passed right-to-work, the state’s personal income growth is second in the country.

Forbes magazine ranks Oklahoma as the eleventh best state in America to do business. Site Selection, magazine that evaluates states and cities for their business enviroment, declared Oklahoma to have the 13th best business climate in the country. Before passage of right to work, we ranked at or near the bottom.  Right to work has worked in Oklahoma- it has worked well.

Contrary to President Obama's statement to his union supporters about how right-to-work is not directly related to economics, it’s clear right-to-work states do better than those without it.  Right-to-work laws allow employers the freedom to hire non-union workers and negotiate contracts with more than one party.

I predict that Michigan will look back in ten years and be grateful to their legislature for having the courage to pass right-to-work.  If they do as well as Oklahoma, it could be what stopped the exodus from the Wolverine state.

Posted by Steve Fair is a Jelly Salesman. at 6:27 PM