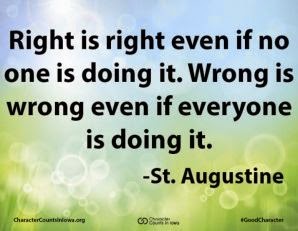 RIGHT IS RIGHT!
by Steve Fair
Last week, the federal Department of Education revoked Oklahoma’s waiver on No Child Left Behind, which means Oklahoma education will not get some federal funding for common education this year.   “It is outrageous that President Obama and Washington bureaucrats are trying to dictate how Oklahoma schools spend education dollars,” Oklahoma Gov. Mary Fallin said in a statement. “Because of overwhelming opposition from Oklahoma parents and voters to Common Core, Washington is now acting to punish us. This is one more example of an out-of-control presidency that places a politicized Washington agenda over the well-being of students.”
This is the first time the federal Education Department has stripped a state of its waiver on the grounds of academic standards, according to Anne Hyslop, a senior policy analyst for Bellwether Education Partners. “This is obviously dicey water for the Secretary Arne Duncan, given growing opposition to Common Core,” Hyslop said.
Joy Hofmeister, the Republican candidate for Oklahoma state Superintendent of Public Instruction, issued the following statement on the fed’s action:  "In revoking our ESEA Waiver before the current academic standards review process could be completed by our State Board of Regents, the Obama administration has rushed to penalize Oklahoma for the repeal of Common Core. This is an example of a punitive overreach by the federal government that shows a lack of caring for our students, and I consider it an outrage to penalize students and children simply because the Obama administration is angry that our state has chosen to chart its own course on educational standards. I will continue my work to fight the federal over-regulation of this failed national initiative. We must focus on what's best for our students."
Democrats in the Oklahoma state House of Representatives were “disappointed, but not surprised,” by the announcement.  House Minority Leader Scott Inman said, “As Oklahomans, we believe that public education is best handled at the local level, by parents, teachers, administrators, state legislators and state education specialists, not by Washington bureaucrats, however, we are not surprised by the Government’s decision. We warned the Republicans against moving forward hastily on this issue, without fully considering all of the potential ramifications.”
First, the stripping of the waiver was not completely unexpected.  The Oklahoma legislature and Governor knew they were taking a risk when they repealed Common Core.  The federal Department of Education has been very vocal about Common Core and how important it was to their agenda.  The feds don’t want states or local school districts establishing curriculum standards.  They want a national curriculum.  Louisiana Governor Bobby Jindal is suing the federal DOE on the grounds the ‘Race to the Top,” program manipulates grant money to force states to adopt the controversial Common Core standards.  Jindal says the program effectively forces states down a path toward a national curriculum in violation of the state sovereignty clause in the Constitution and federal laws that prohibit national control of education content.   Those who think the Common Core fight is just about education are naïve.  This is about federal control, not just education standards.
Second, Oklahomans should be livid at the Obama administration.  This is a classic example of federal overreach.  When the feds hold up our money because we will not comply with what they want, we have a real problem.  This action is in direct violation of the U.S. Constitution.  The federal government doesn’t have the right to dictate what standards a local school district uses.  They don’t have the authority to punish a state financially when the citizens of that state don’t want their standards.
Third, the Common Core concept is not a proven method to improve education.  Jason Richwine of the National Review says, “Much like the push for government preschool, the Common Core movement is suffused with much hope but little evidence.” Richwine says the research evidence behind Common Core focuses on identifying problems – America’s poor international ranking, achievement gaps, high school graduates without basic skills, etc. But when it came to writing standards to address those problems, the Common Core developers had little to go on except the standards of high-performing nations and the “professional judgment” of various stakeholders. He concludes that Common Core is not a proven commodity and should be viewed as theoretical at best.
Fourth, sometimes there is a price to pay for doing right.  Some misguided critics are blaming Republican legislators for the loss of federal funds, not the real culprits.  Who should be taking the heat are the federal Department of Education and the Obama administration.  The repeal may cost Oklahoma some federal money, but at some point- right is right. The federal government has always wanted to tell states what to teach and how to teach it.  They have used intimidation tactics and economic incentives to entice states to do what they want.  Oklahoma took a stand- a principled one and it will likely cost us some funding, but right is right.
Posted by Steve Fair is a Jelly Salesman. at 10:21 AM