SELF GOVERNMENT REQUIRES GETTING INVOLVED! 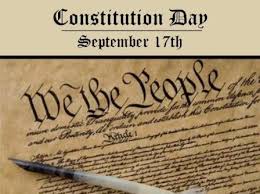 THE CONSTITUTION TURNS 228!
by Steve Fair
Thursday is Constitution Day or Citizenship Day.  It recognizes the adoption of the U.S. Constitution and those who have become U.S. citizens either by birth or by naturalization.
The U.S. Constitution was signed on September 17, 1787 by thirty nine men.  Signers include George Washington, James Madison, Ben Franklin, and Alexander Hamilton.  Franklin, 81, was so feeble that he required help to sign the document.  Tears streamed down his face as he put pen to paper.  Future Presidents Thomas Jefferson and John Adams did not sign the document because they were both out of the country.  Of the fifty-five authorized delegates to the Constitutional Convention, thirty-nine actually signed the Constitution. Edmund Randolph and George Mason of Virginia and Elbridge Gerry of Massachusetts refused to sign due in part due to the lack of a bill of rights.  Patrick Henry didn’t attend the convention because in his words: ‘he smelled a rat.’  34 of the delegates were lawyers, 8 had signed the Declaration of Independence and half were Revolutionary War veterans.
James Madison was the only delegate to attend every meeting. He took detailed notes of the various discussions and debates that took place during the convention. The journal that he kept during the Constitutional Convention was kept secret until after he died. It (along with other papers) was purchased by the government in 1837 at a price of $30,000 (that would be $654,000 today). The journal was published in 1840.
The actual writing of the Constitution was done by Jacob Shallus, a Pennsylvania General Assembly clerk.  He was paid the handsome sum of $30 ($789 today).  The text of the Constitution was printed by John Dunlap and David Claypoole in Philadelphia and sent to the various state constitutional conventions for debate and discussion.  The Constitution was ratified by specially elected state conventions beginning in December 1787. The order in which the thirteen states accepted the new constitution was Delaware, Pennsylvania, New Jersey, Georgia, Connecticut, Massachusetts, Maryland, South Carolina, New Hampshire, Virginia, New York, North Carolina and Rhode Island.
Since 1952, the U.S. Constitution has been on display in the National Archives Building in Washington, DC. Currently, all four pages are displayed behind protective glass framed with titanium. To preserve the parchment’s quality, the case contains argon gas and is kept at 67 degrees with a relative humidity of 40 percent.
The U.S. Constitution has 4,400 words. It is the oldest and shortest written Constitution of any major government in the world."  It has 27 amendments, but has only been amended 17 times since the first 10—which make up the Bill of Rights.  When the Constitution was signed, the United States’ population was 4 million. It is now more than 321 million. Philadelphia was the nation’s largest city, with 40,000 inhabitants.  This week the Constitution will celebrate 228 years.  Few documents have guided a people or government for that length of time.  What is the genius of the Constitution and why has it endured so long?
First, it recognizes that individual rights and liberty do not originate with man, but with a divine Creator.  The founders understood that if a man centered government could grant rights, those rights could just as easily be taken away.
Second, the document separates the powers of government by establishing three branches of government with carefully defined powers.  John Adams, the father of the Constitution said, "The accumulation of all powers, legislative, executive, and judiciary, in the same hands, whether of one, a few, or many... may justly be pronounced the very definition of tyranny." The founders worried about absolute power corrupting absolutely.
Third, the real genius of the Constitution is it can be changed.  Self government allows for the people to demand the document be amended.  John Marshall said, “The people made the Constitution, and the people can unmake it. It is the creature of their will, and lives only by their will.”
The Constitution has served us well and every American should love our founding document.  Unfortunately most Americans have never read it.  In his farewell address to Congress, former U.S. Congressman Ron Paul said:  “Our Constitution, which was intended to limit government power and abuse, has failed.  The Founders warned that a free society depends on a virtuous and moral people.  The current crisis reflects that their concerns were justified.”  The document hasn’t failed.  In a self-governing society, when the founding document is not followed we have only ourselves to blame.  Americans have taken no interest in their government.  The Constitution should and must be followed to the letter- it is the ONLY source of authority that government has and that authority comes from the people.
Posted by Steve Fair is a Jelly Salesman. at 2:30 PM