CPI HAS A LIBERAL AGENDA! 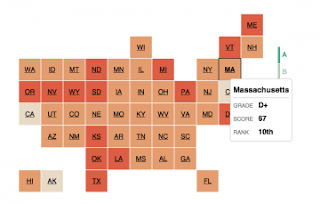 CENTER FOR PUBLIC INTEGRITY
HAS NO INTEGRITY!
by Steve Fair

This week, The Center for Public Integrity released their 2015 State Integrity Investigation report.  They concluded only three (3) states scored higher than a D and eleven(11), including Oklahoma, flunked.  The states with the most transparent government, according to CPI, are Alaska, California, Connecticut and Rhode Island.
The CPI says the State Integrity Investigation is a comprehensive assessment of state government accountability and transparency. The project uses extensive research by reporters in each state to grade and rank the states based on existing laws and analysis of how well they are implemented.
The report gives Oklahoma a B for auditing and a C+ for procurement, three Ds and seven Fs in the thirteen categories.  You can see the full report at publicintegrity.org.  Oklahoma’s overall grade was 59, an F.  “The public’s right to access information under Oklahoma’s laws continues to be chipped away, and the state lags behind others on measures that could hold judges and other public officials accountable for such behavior,” the report says.  In 2012, Oklahoma received a grade of ‘D’ on the report, so their conclusion is that Oklahoma is going backwards in state government transparency.
Who is this Center for Public Integrity?  The organization was founded in 1989 by Charles Lewis, a former investigative TV reporter for ABC and CBS.  Lewis is an outspoken critic of former President George W. Bush.  He wrote a couple of books critical of Bush; The Buying of a President and 935 Lies.  935 Lies is about how Bush and his administration lied to the American public about Saddam having weapons of mass destruction.   Lewis left CPI in 2004 and now teaches a course on investigative journalism at Princeton and American University.  Peter Bale, formerly of CNN, is the CEO.  Arianna Huffington is on the board. The CPI says their mission is, “to serve democracy by revealing abuses of power, corruption and betrayal of public trust by powerful public and private institutions, using the tools of investigative journalism.”
Who funds the CPI foundation?  One prominent contributor is the OPEN SOCIETY INSTITUTE.  The founder of OSI is left-wing George Soros.  Soros funds Moveon.org and is most famous for dropping $40 million trying to get Senator John Kerry elected President in 2004.  Speaking of Kerry, another CPI donor is the Heinz Endowments, a philanthropy run by Teresa Heinz Kerry, the formerly-prospective First Lady.  Also in the money mix is the Streisand Foundation, run by the fabulously liberal Barbra Streisand.  Graeme Wood, a contributing editor for The Atlantic and The New Republic, both liberal magazines, ponies up $250,000 annually for the CPI.
CPI bills itself as non-partisan, but it is far from that.  It is a non-profit liberal organization run by liberals with a liberal agenda.  Their scam is to present themselves as an objective journalist organization only reporting the facts, but that is not their true goal.  Their primary goal is to control money that flows into political campaigns, which is consistent with George Soros’ stated goal of taxpayer funded elections.  There is no doubt there are violations of open records laws in Oklahoma, but CPI’s observation that a “plumber down the street” may have a more difficult time accessing routine public records he is entitled to under Oklahoma law,” is not a fair analysis. Oklahoma government is far more transparent that it was under Democrat rule.  For nearly 100 years, Oklahomans were force fed lies and fleeced by their elected officials.  This "objective' report is nothing short of propaganda and isn’t worth the ink it took to print it.
Posted by Steve Fair is a Jelly Salesman. at 7:29 PM