ELECTIONS DO HAVE CONSEQUENCES! 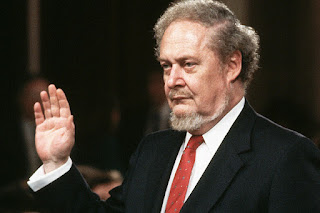 For the next nine months, much will be said and written about appointments to the Supreme Court.  Already, both political Parties have staked out their positions.  President Obama says he has a constitutional duty to appoint a Justice to replace Antonin Scalia.  The Republicans in the U.S. Senate say they will not approve any appointment or even have a hearing to vote on a nominee until the next president is inaugurated.
Just hours after Scalia’s body was found, Senate majority leader Mitch McConnell, (R- KY), said, “The American people should have a voice in the selection of their next Supreme Court Justice. Therefore, this vacancy should not be filled until we have a new president.”  In response, President Obama said, "I am amused when I hear people who claim to be strict interpreters of the Constitution suddenly reading into it a whole series of provisions that are not there.  I am going to present somebody who indisputably is qualified for the seat and any fair minded person, even somebody who disagreed with my politics would say would serve with honor and integrity on the court."
Former Secretary of State Hillary Clinton, said McConnell's move was "outrageous." "Elections have consequences," she said. "The president has a responsibility to nominate a new justice and the Senate has  a responsibility to vote." Senate Judiciary Committee Chairman Chuck Grassley (R-Iowa), indicated he has no plans to start up the confirmation process on his panel before next year.  "This president, above all others, has made no bones about his goal to use the courts to circumvent Congress and push through his own agenda," Grassley said. "It only makes sense that we defer to the American people who will elect a new president to select the next Supreme Court Justice.”
First, SCOTUS vacancies have gone longer than a year in the past.  In 1970, Harry Blackmun replaced Abe Fortas after just over a year.  President Tyler had the most difficult time getting appointments approved by the Senate.  One vacancy was open for over two years.  The Senate rejected a total of nine of Tyler’s appointments to the high court.  A Supreme Court vacancy in the final year of a president’s term is pretty rare.  Since 1900, it has happened only three times.  LBJ, in 1968 after he announced he wasn’t running for re-election.  Both of Johnson’s nominations- one for Chief Justice and another for Associate Justice- were rejected.
Second, elections do have consequences.  Secretary Clinton is absolutely right.  Republicans control the U.S. Senate and can block any nomination made by President Obama.  For years, there was an unwritten rule that any ‘qualified’ candidate for the high court would be confirmed.  Their ideology and positions on controversial issues would be secondary to their legal qualifications.  But the Democrats changed that in 1987.  Judge Robert Bork was an accomplished Circuit Court judge when President Reagan nominated him to the SCOTUS.  Within an hour of the announcement, then Senator Ted Kennedy, (D- MA) went on television to accuse Bork of envisioning an America “in which women would be forced into back-alley abortions, blacks would sit at segregated lunch counters, rogue police could break down citizens’ doors in midnight raids.” Commercials were run by the Democrats featuring Gregory Peck as Atticus Finch from To Kill a Mockingbird attacking Bork’s ideology.  Bork’s nomination was defeated in the Senate 58-42.  The dictionary defines “to bork,” as: “to defame or vilify (a person) systematically, esp. in the mass media, usually with the aim of preventing his or her appointment to public office.
President Obama has the right to present a SCOTUS nominee to the Senate and the Senate has the responsibility to the American public to put the process on hold until after the next president is sworn in.  This is not unchartered water.  In our nation’s history, appointments to the high court have been a source of great controversy.   Elections do have consequences.  When Republicans took control of the Senate in November 2014, the American people were rejecting the liberal policies of the Obama administration.  Democrats can’t have it both ways.  McConnell and Grassley are right to wait until the next president is in office to make the appointment.  That means this election has more consequences than most.