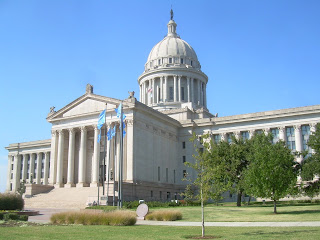 
On Friday, the Oklahoma state legislature adjourned sine die, which is Latin for ‘without day.”  That effectively ends this legislative session unless a special session is called.  The session was a challenging one.  Lawmakers faced a historic $1.3 billion dollar budget shortfall primarily due to the depressed price of oil.  On Friday the House narrowly passed the nearly $7 billion dollar budget that borrows $200 million to fill the budget hole. “This budget closes a sizable portion of a monumental budget hole and prevents the dire, unacceptable outcomes so many Oklahomans have feared may happen this session. There are still reductions in this budget, but it is certainly a workable budget even amid a major energy sector downturn that is creating difficulties all across Oklahoma,” Gov. Mary Fallin said in a prepared statement.


The legislature passed a resolution that will have voters considering modernizing Oklahoma’s liquor laws.  If the State Question passes in November, wine and strong beer will be sold at grocery stores.   They killed a bill that would have increased taxes on cigarettes by $1.50 a pack to shore up the state’s Medicaid program.  They killed the federal mandated RealID, but it will be back. You can bet on it.  National Popular Vote raised its ugly head, but didn’t get any traction, but it will be back as well.


Once again the legislature talked about school consolidation, but nothing was done.  Senate President Pro Tempe Brian Bingman, (R- Sapulpa) says it is a major issue the state must address.  “The state doesn’t need over 500 school districts,” he said.  Same goes for consolidation of state law enforcement agencies-talked about, but never seriously considered.


Education saving accounts(ESAs) were discussed but effective lobbying by the education establishment killed it.  Civil asset forfeiture proposals were opposed by law enforcement and never considered,  A House Joint Resolution to let voters consider making it harder to put restrictions on gun ownership failed.  So did a ‘Vermont carry’ bill.


The legislature passed a bill that if signed into law would have made abortion illegal in the state and those who performed abortion subject to having their medical license revoked.  Governor Fallin vetoed the bill, saying it would never pass judicial scrutiny.  The authors of the bill did not attempt to override the Governor’s veto.


Voters in November will be voting on whether Oklahoma will participate in a ‘convention of the states,” the so-called Article five convention.  Proponents of an Article Five insist that Congress will never pass a balanced budget amendment and term limits and so states must take the bull by the horns and convene a constitutional convention to get it done.  Those who oppose the Article Five don’t oppose a balanced budget amendment and term limits, but believe the Article Five is not the right vehicle.  Former U.S. Senator Tom Coburn is a big supporter of the Article Five.  Phyllis Schlafly of the Eagle Forum opposes an Article Five.  This issue divides many in the conservative ranks.  All agree on the goal, but not on the vehicle. Dr. Tom Coburn correctly pointed out that voters do not have to approve the Article Five- only the state legislature.  I appreciate him pointing that out and it allowed me to address the Article Five in this week's editorial(above)


Legislators also passed a Joint Resolution that will have voters in November deciding on whether to remove the so-called ‘Blaine amendment,” from the state constitution.  The Blaine was what the state Supreme Court cited as what forced the removal of the Ten Commandments monument from state property.


This legislative session has been criticized, second-guessed and maligned more than any in recent history, but fact is no Oklahoma legislature has faced a budget hole this big- ever.  Even in the ‘80s during the oil bust, it was never this bad.  There is no doubt lawmakers could have done some things differently and increasing their own operating budgets doesn’t make you look good, but they did cut state government spending.  Everyone has an opinion- and they are entitled to it- about how the legislature performed.  Abraham Lincoln said, “He has a right to criticize, who has a heart to help.”  But it’s a lot easier being an arm chair quarterback than playing the game.

Posted by Steve Fair is a Jelly Salesman. at 8:17 PM