There is a RIGHT time & a WRONG time to protest! 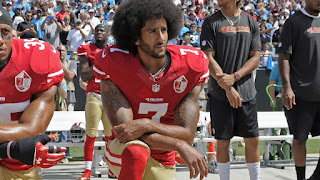 DISRESPECT HAS CONSEQUENCES!
by Steve Fair

African-American males comprise only 6% of U.S. population, but nearly 70% of National Football League (NFL) players.  A recent demographic study found the fan base of the NFL is 83% white and 64% male.  The NFL is a profitable business and according to Commissioner Roger Goodell revenue for the league in 2017 will reach $14 billion.  Forbes reports NFL teams can afford to pay the player salaries thanks to the “wheelbarrow of TV money the 32 NFL teams get each year.” CBS, Fox, NBC and ESPN/ABC paid roughly $5 billion last year for the rights to NFL games and cable providers kicked in another $2 billion. The average NFL team makes over $100 million annually and the average team is valued at over $2 billion dollars. The average ‘rookie’ in the NFL makes $365,000 a year and the average overall salary for an NFL player is $1.9 million annually.
Last season, Colin Kaepernick, then quarterback for the San Francisco 49ers, took a knee during the national anthem.   "I am not going to stand up to show pride in a flag for a country that oppresses black people and people of color," Kaepernick said. The movement has spread throughout the NFL- particularly with African- American players.  On Sunday dozens of players from several teams refused to stand or take the field during the playing of the national anthem.
On Friday at a rally in Alabama, President Trump said that NFL players who kneel or protest during the playing of the national anthem should be fired.  On Sunday, Trump tweeted that fans should boycott NFL games unless the league fires or suspends players who refuse to stand for the national anthem.  “Players must stop disrespecting our flag and country. If NFL fans refuse to go to games until players stop disrespecting our country, you will see change take place fast. Fire or suspend.” the president wrote.
Jerry Jones, the owner of the Dallas Cowboys, agrees with the president.  "I just feel so strongly that the act of recognizing the flag is a salute to our country and all of the people that have sacrificed so that we can have the liberties we have.  I feel very strongly that everyone should save that moment for the recognition of the flag in a positive way,” Jones said on a Dallas sports talk show.
The NFL’s non-response to this issue is hurting the marketability of their product.  A significant percentage of the NFL’s customer base is offended by these player protests and may very well heed Trump’s call to boycott.  A widespread boycott would result in a decline in revenue, impacting player salaries.  It is not likely these protesting players have ‘connected the dots,’ but their actions could result in lower pay or no pay.
In our nation’s history, 1.2 million Americans have died in the defense of our country.  They died for the right of these highly compensated NFL players to exercise their right to disrespect the flag, but they also died for the right of those to not buy their product.
Posted by Steve Fair is a Jelly Salesman. at 8:55 AM