Trump will not seek to repeal 22nd amendment! 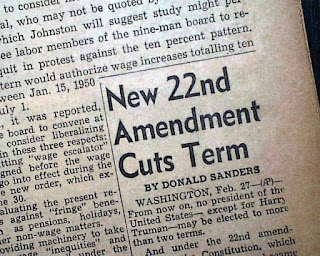 Pure Democracy is Mob Rule!
by Steve Fair
The Washington Gridiron dinner is an event that features roasts by the media and by politicos.  Every President since Grover Cleveland has participated.  President Trump broke with tradition and chose not to participate last year and was roundly criticized by the media.  This year he showed up and the media blasted him.  In Sunday’s New York Times the editorial board said Trump’s praise for Chinese President Xi Jinping promoted ‘authoritarianism.’  At the satirical dinner Trump said about XI : “He’s now president for life- President for life.  No, he’s great.  Maybe we’ll give that a shot someday.”  The Times said, “There’s something in the man that impels him reflexively to celebrate the authoritarian model.  Mr. Trump was surely joking about becoming president for life himself.  But there can be little doubt now that he truly sees no danger in Mr. Xi’s great decision to extend his own rule until death. “The board was also critical of Trump’s relationship with Russia’s Vladimir Putin, Turkey’s Recep Erdogan and the Philippines Rodigo Duterte, who they described as brutal and autocratic rulers.  They conclude Trump is ‘uncomfortable with democracy,” and wants to serve more than eight years.
First, Trump’s remarks about China’s Xi shouldn’t be taken serious.  They were made in jest.  The Times is just looking for something to criticize.  Trump gives the media enough ammo on policy and rhetoric without their sensationalizing a remark made at a roast.
Second, The United States is a democratic republic, not a pure democracy.  If the editorial board of the second largest newspaper in the country doesn’t know that, then we are in trouble.  Sadly, many citizens don’t know the difference and fail to see the genius in the Electoral College.  In the editorial the Times takes a shot at the Electoral College.  Sadly most Democrats and some misguided Republicans advocate abolishing it and electing the POTUS by popular vote.  If that had been the case in 2016, Hillary Clinton would be president.  Trump lost the popular vote by three million votes, but won the Electoral College vote.
Three, after FDR died in 1945, Congress passed the 22nd amendment a couple of years later.  It was ratified by the states on February 27, 1951.  It limits the president to two terms in office, a total of eight years.  Americans recognized having a president serve more than eight years could be detrimental to the country and pushed for limiting the terms of the POTUS.  For Trump to serve more than eight years, the 22nd amendment would have to be repealed.  It won’t happen.
Using fear and misinformation to push a socialist agenda, the New York Times clearly hate the American system of government.  Pure democracy is nothing more than mob rule.  That would present a far bigger threat to America’s future than eight years of Donald Trump.
Posted by Steve Fair is a Jelly Salesman. at 5:38 PM