The real problem is the GOSPEL VOID, not CIVICS VOID! 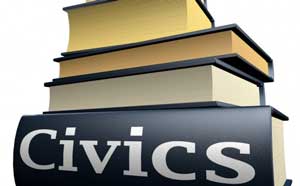 CIVICS IS NOT THE ANSWER
by Steve Fair
On Saturday, the SW Oklahoma Republican Women held their annual Beans & Baskets fundraiser in Altus.  The keynote speaker was Nick Adams, a 33 year old Australian native, who has written four books on American exceptionalism.  Adams is a Fox News commentator and a highly sought speaker.  President Trump is one of his biggest fans.  The POTUS has twice tweeted that out his admiration for Adams and has been photographed carrying one of Adams’ books aboard Air Force One.
Adams heads up a 501c3 organization- FLAG- that is publishing America’s founding documents, The Declaration of Independence and the Constitution, in simple easy to understand formats for elementary students.  Adams claims over 500,000 students in all 50 states have copies of their version of the Constitution.  Adams is a very organized, articulate, polished, impressive speaker.  His analysis of what is wrong with America- in particular the ‘political correctness’ movement- is right on target.   Adams believes restoring ‘civics’ to America’s classrooms will save the country.  While commendable, expanding civics and stopping political correctness will not save America.
America school children should study civics.  Civics is the study of the rights and duties of citizenship.  If you are a citizen in a country, you should know something about the country’s founding, the system of government the country uses, and how it works.  Sadly, many schools across America do not teach civics and if they do, it has a liberal slant.  That has resulted in widespread ignorance in millennials.    In 2006, The National Assessment Governing Board, found that only 24% of fourth-graders, 22% of eighth- graders and 27% of twelfth graders were proficient in U.S. history and had working knowledge in how America’s government works.  In a more recent study carried out in 2015 for the American Council of Trustees and Alumni (ACTA), more than 80 percent of college seniors at 55 top-ranked universities tested on their knowledge of American history and government received grades of D or F.  It’s tragic that we have failed to teach a generation of children anything about our country.
Adams also advocates for the teaching of American exceptionalism.  The concept of American exceptionalism was first mentioned in 1831 by Alexis de Tocqueville.  Exceptionalism is a concept that the United States is founded on principles of personal liberty, capitalism, and a belief that all rights are God given, not granted by the government.  As long as it is understood that every American, like every other human being is a fallen creatures and fallen creatures create flawed systems of government, it’s fine to refer to America as exceptional as compared to other nations.  The problem is many who talk about American exceptionalism are talking about patriotism, not our system of government.
Nick Adam’s assessment of what is wrong in America- apathy and political correctness- is right, but his solution treats the symptom, not the disease.  The only thing that truly will change America is the gospel of Jesus Christ.  The real void in this country is not the lack of teaching of civics in the classroom- it’s the lack of preaching of truth from pulpits.  Americans want their ears tickled, but not their hearts pricked and consumer driven churches have accommodated them.  Until that changes, it won’t get any better.

Posted by Steve Fair is a Jelly Salesman. at 6:26 PM