SPEAKING THE TRUTH IN LOVE HAS BEEN ABANDONED! 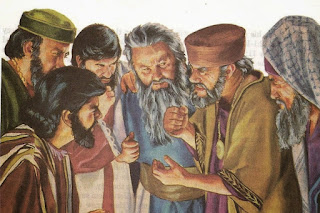 POLITICAL PHARISEES
by Steve Fair
The Pharisees were an ancient Jewish sect, distinguished by strict observance of the traditional and written Mosaic Law.  They took great pride in their sanctity.  In other words, they were proud of not being proud.  They bragged about what they did and what they didn’t do.  They were very disciplined and looked down their nose at those who weren’t.  They were experts in the law, quoted it at every turn and condemned anyone who disagreed with them.  We know about the Pharisees from the New Testament and their conflicts with John the Baptist and Jesus.   The modern day equivalent of a Pharisee is those that condemn any opposing viewpoint.  They show a complete lack of respect for their fellow man, set their selves up as morally superior and fail to recognize their own inherent depravity.   They fail to understand there was only one perfect person and it ain’t you.
There is a right way to stand for truth.  Taking a stand against clear error is an honorable goal, and sometimes being contentious is necessary, but it should be a proper contention and not one that disrupts peace.  Proper contention is loving and kind, not condemning and divisive.  It is based on absolute divine truth and not human opinion.  It is done with humility and thoughtfulness.
Jesus said the Pharisees were blinded to the truth.  America is a land full of blind people who need their eyes opened.  Arguing with them, yelling at them and confronting them because they are stumbling in the wrong direction will do no good.  God has to open their eyes.
A political Pharisee is no different than a secular one.  They believe if they work hard enough they will change things.  They just need to contend longer and harder.  They believe God is completely dependent on their feeble efforts to accomplish His will, so instead of spending time on their knees before a holy sovereign Creator who can change hearts in an instant, they get on a soapbox and insult anyone who disagrees with them- all in the name of truth.  By doing that, they often bring shame upon the very cause they claim to promote.
Christians are exhorted to ‘earnestly contend for the faith.’  That means the Gospel- the good news.  The simple message that man is without hope outside of Christ and he can’t do any good work to have that hope.   It’s not enough to believe in God.  It requires a personal relationship with Jesus.  The gospel is the only hope for America- and the world.
Throughout history, those in error have been the most confrontational, not those contending for the truth.  But sadly, that has changed.  Speaking the truth in love has been abandoned for name calling, character assassination, mischaracterization, and sensationalism.  Using exciting, shocking stories or language at the expense of accuracy to provoke interest or excitement is more fun than quietly contending for the truth, but it’s not the right way.
Posted by Steve Fair is a Jelly Salesman. at 2:22 PM