CORRECTIONS & OBSERVATIONS ON THE REFUGEE ISSUE! 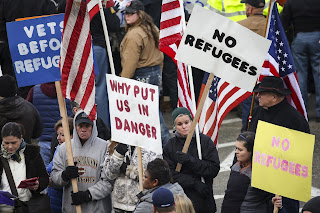 STITT SHOULD HAVE FOLLOWED ABBOTT’S LEAD!
by Steve Fair

Last week’s column on Governor Stitt’s decision to let refugees continue to be resettled in the Sooner state had several readers weighing in.  Most agreed with me, but three were adamant that I was either woefully ignorant of the facts, mischaracterizing the refugee resettlement program or a fear monger who dispenses propaganda.  In the spirit of Jonathan Edward’s 34th resolution to never knowingly dispense anything in error, I want to correct two errors in the column. Here are two corrections and two observations:
First, refugees are not the same as the illegals entering the country. Refugees request protection while still in their country and are then given permission to enter the U.S.  There is little difference between a refugee and an asylum seeker- just where they are when they apply.  Refugees are out of the country, asylum seekers are either in the country or at a port of entry.  Refugees who are allowed to enter are supposed to be ‘vetted’ before being allowed entry; however in most cases they are fleeing countries where there is little or no government.  For that reason, the FBI said it was next to impossible to ‘vet’ the Syrian refugees.  Trusting the government to ‘vet’ the refugees is like trusting the government to live up to their promises on social security.
Second, Stitt’s action doesn’t make Oklahoma a ‘sanctuary’ state.  A sanctuary is a city, county or state that passes an ordinance or law that prevents ICE from enforcing immigration laws.  Stitt’s letter to Secretary of State Pompeo continues to let refugees flow into Oklahoma.  That was a mischaracterization of the refugees and the action of Stitt’s letter.  I apologize for the error.
Third, many of the faith leaders urging the Governor to continue the program have skin in the game.  They aren’t helping these refugees resettle for nothing.  The federal government (taxpayers) pays nine primary national contractors across the country to resettle refugees and asylees. These voluntary agencies (VOLAGs) are Church World Service/National Council of Churches, Ethiopian Community Development Council, Hebrew Immigrant Aid Society, International Rescue Committee. Lutheran Immigration and Refugee Services, Catholic Charities/U.S. Conference of Catholic Bishops, U.S. Committee for Refugees and Immigrants, Episcopal Migration Ministries, and World Relief Inc.  There are some 350 federal subcontractors in 190 cities, all affiliated with these nine main refugee VOLAGs.  In addition to federal funds, these groups get funding through a variety of often liberal foundations to resettle refugees.  Since President Trump was elected, he has dramatically reduced the number of refugees allowed into the U.S. each year, which has resulted in many of their operations being severely cut.
Fourth, Stitt should have followed Texas Governor Greg Abbott’s lead and opted out of accepting more refugees.  In a letter to Pompeo on Saturday, Abbott said: “At this time, the state and nonprofit organizations have a responsibility to dedicate available resources to those who are already here, including refugees, migrants, and the homeless—indeed, all Texans. In May 2019, for example, around 100,000 migrants were apprehended crossing this state's southern border. In June 2019, individuals from 52 different countries were apprehended here.”  Oklahoma doesn’t have the illegal immigration issue of Texas, but we certainly have our fair share.  With the oil/gas industry struggling and .Texas and Oklahoma’s unemployment rate almost the same- 3.4%- Abbott is right.  It’s time to take care of those who live here and pay taxes.
Posted by Steve Fair is a Jelly Salesman. at 4:30 PM

Evangelical Immigration Table is in several states. This group may be funded by George Soros according to "Pulpit and Pen". Many ministers and faith leaders in various in different states are signing a letters to their Governors to accept illegals. Governor Stitt a letter from this group in Oklahoma. There are people who are here legally with a green card who have waited a long time to become legal citizens. It is not fair to them. Many of these illegals have criminal records and have not being vetted. I am not for refugee settlement.
MARYJMCCAULEY