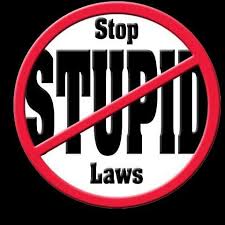 Major on the Majors!

Oklahoma’s Book of Statutes is growing!  Oklahoma has 90 categories/titles of laws ranging alphabetically from agriculture to workers compensation.  Oklahoma has some doozies- for example: (1) whaling is illegal, (2) you can’t eat another person’s hamburger, (3) No spitting on the sidewalk, (4) it’s illegal to sleep with your boots on, (5) you can’t make ‘ugly’ faces at dogs.  Each year, hundreds of laws are added to the books- some necessary, but many added are not essential to the survival of the Sooner state.

Oklahoma legislators collectively proposed over 2,200 new laws in 2021.  About 350-400 will make it to the books, many that are unnecessary.  The unjustified ones try to fix problems that don’t exist.  Others fix something that should be a local issue- classic government overreach.  Most of the extraneous ones pass the legislature with near unanimous votes because legislators are trading favors with fellow lawmakers in order to get their legislation supported.  It’s not just in Oklahoma.  Over legislating is rampant across the country.  From Congress to state legislatures, lawmakers believe they must have a bill signed into law to be an effective representative, so they run bills that do little more than clog up the process.  Instead of spending precious time on meaningful legislation and the budget, feel good, heartwarming bills take up time and effort.  Three observations:

First, Oklahoma legislative leadership should cut back on the number of bills run each year.  Twenty years ago, the Oklahoma legislation had less than 1,000 proposed bills each session.  That number has more than doubled in two decades and the increase has come under Republican leadership.  Instead of majoring on the majors, the budget is often passed in the last days of a legislative session and isn’t afforded the time for scrutiny it deserves.

Second, constituents should press their legislators to major on the majors.  If enough voters asked their legislator about the state budget when they interacted with them, legislative leadership would eventually get the message.   Ask your representative or senator where is the budget in the process?  How big is it?  How much will it grow Oklahoma government?  Were cuts made where needed?  Instead of lobbying to pass or kill a meaningless, unnecessary bill, hold your representative and senator accountable for the budget.  Currently in the Oklahoma legislation, a very few select legislators work on the budget and the rest are marginally involved.  The legislative leadership deny such an oligarchy exists in regard to the budget, but any honest legislator will tell you it is the truth.

Third, individual legislators need to stop running uncalled for legislation.  That takes discipline and may require telling a constitute no, but until they grow some iron rail up the shirt tail, the only party benefiting from Oklahoma’s growing Book of Statutes is the printer.

HB #1569- the Play to Learn bill- passed both chambers with veto proof margins.  It is now on the governor’s desk, awaiting his signature.  Seriously, do we really need a state law on the books allowing Play to Learn in local school districts?  How about one allowing recess in local schools or blackboards in the classroom?  Is the Oklahoma Highway Patrol going to enforce it?  This is a perfect example of majoring on the minors.  Please contact Governor Stitt’s office and ask him to veto HB#1569.  Ask your legislator to vote to not override the veto.  Passing this kind of laws won’t get Oklahoma to a top ten ranking in the nation.  Lawmakers need to refocus on necessary legislation and a state budget that right sizes Oklahoma government, not feel good, heartwarming bills.

Posted by Steve Fair is a Jelly Salesman. at 7:38 PM