AGREEING TO DISAGREE ON ABORTION MAY NOT BE POSSIBLE! 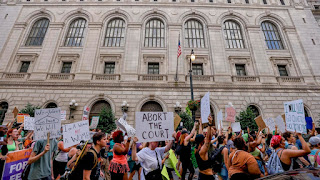 After the U.S. Supreme Court (SCOTUS) overturned Roe vs. Wade, liberals claim the three justices appointed by President Trump defrauded them.  Senators Susan Collins, (R-Maine), Lisa Murkowski, (R-Alaska) and Joe Manchin, (R-West Virginia) all claim two of the justices in meetings during the confirmation process told them they wouldn’t overturn Roe vs. Wade and would rule based on legal precedent. The senators cried betrayal.  That seems to be standard protocol for the SCOTUS.

During the past 62 years in American history, Republicans and Democrats have each had seven presidents, but Republicans have named 12 of the 20 Supreme Court justices appointed during the period.  Five of those GOP presidential nominees turned into left-leaning justices: Earl Warren (Eisenhower), William Brennan (Eisenhower), Harry Blackmun (Nixon), John Paul Stevens (Ford), and David Souter (GHW Bush).  Each of the five claimed during their confirmation they would rule based on the ‘original intent’ of the Constitution, but they hoodwinked, double-crossed, and bamboozled conservatives. Many of the liberal rulings from the court in the past fifty years were accomplished with the aid of these five deceivers.  In fact, Harry Blackmun, Nixon’s appointee, wrote the majority opinion in the 1973 Roe vs. Wade decision.  Three observations:

First, determining how a SCOTUS justice is going to rule is next to impossible- at least for Republican nominees.  In addition to the examples cited above, President Reagan appointed three justices to the court: Sandra Day O’Connor, Antonin Scalia, and Anthony Kennedy.  Of the three, only Scalia was a reliable conservative vote.  Kennedy and O’Connor were as unpredictable as the Oklahoma weather.  President George H.W. Bush appointed Clarence Thomas and David Souter.  Souter, who retired in 2009, was a disappointment and became a centrist.  Thomas has been one of the most conservative members of the SCOTUS.  Justices appointed by Democrat presidents have ruled consistently from the left- just as they said they would.  It seems dupery is only on the right.

Second, Democrats have missed opportunities on the SCOTUS.  In the last 50 years, only 6 of the most liberal justices have retired when the president was a Democrat.  On the conservative side, 6 of the most conservative justices have resigned with a Republican was president.  Justice Thurgood Marshall would not retire when President Carter was president and Justice Ruth Ginsburg did the same thing when President Obama was POTUS.  They were both replaced on the court by Republican nominees.

Third, the SCOTUS ruling did not make abortion illegal.  The ruling pushed the issue back to the states.  In the majority opinion, Justice Samuel Alito wrote: “Roe vs. Wade was egregiously wrong from the start.  It is time to heed the Constitution and return the issue of abortion to the people’s elected representatives.”  Some elected representatives/legislatures have already taken up the issue.

At least seven states have ‘trigger laws.’  Arkansas, Kentucky, Missouri, Mississippi, Oklahoma, South Dakota and Wisconsin are among those that will restrict or outright ban abortion.

The SCOTUS ruling will force most- if not all- state legislatures across the country to take up the issue of abortion in the near future.  Their policy on life will further ideologically divide the United States along lines that might not be reconcilable.   Two can’t walk together except they be agreed.  The view on the importance of unborn life is the issue that could disjoin the union.  Agreeing to disagree may not be possible on this issue.

Posted by Steve Fair is a Jelly Salesman. at 8:50 PM