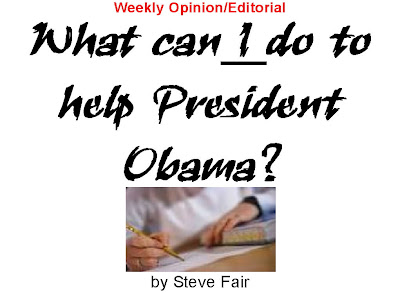 On Tuesday September 8, 2009, President Obama is scheduled to address the nation’s schoolchildren in a nationwide broadcast. Not since President Roosevelt addressed the nation’s children via radio and talked about the sacrifices their parents and relatives were making to preserve their freedom has a President targeted this demographic specifically.

The plan continues by suggesting that, “Students can record important parts of the speech where the President is asking them to do something." Students might think about: "What specific job is he asking me to do…Are we able to do what President Obama is asking of us?”

The original plan was to ask children to “write letters to themselves about what they can do to help the president.” After a huge public outcry, the administrative changed that to encouraging kids to write down their goals. The former assignment better fit me, so I have written a letter to myself on how I-Steve Fair- can help President Obama.

You can also help the president by not agreeing with positions he takes that are clearly against the tenets of the U.S. Constitution. While we are to be submissive to those that have rule over us, we are to make sure we hold those accountable to our founding document. You can point out the Constitution clearly guarantees the right to keep and bear arms, and the right of every citizen to defend themselves. You can point out that children in the womb of their mother are guaranteed, as citizens of this country, the right to “life, liberty and the pursuit of happiness,” which clearly makes abortion on demand unconstitutional, not to mention unbiblical. You can point out to the president that while he may believe the Constitution is “deeply flawed,” (he said so in 2001), it is still our nation’s founding document and he swore an oath to “uphold and defend” it.

You can help the president by reminding him the United States is a capitalist nation. America’s economic system rewards those that work hard and government has no right to take from the needy to give to the greedy. You can point out to the president that no government, business, family or individual can spend more than they take in and survive. You can remind him that out of control government spending will be the ruination of America. You can point out that the national debt has increased by over one third in the just the first six months of his presidency with bailouts and stimulus monies and there doesn’t appear to be an end in sight.

You can help the president by directing him to a friend and former colleague who can educate him on the issues of health care. Encourage him to visit with Senator Tom Coburn, M.D. and the other physicians in Congress and ask their opinion on what needs to be done on health care reform.

Yes, Steve, you can help the president, but you must recognize that no matter how much you disagree with Mr. Obama, that a sovereign God placed him in the position of authority he occupies. The best way you can help the president is to pray that God will change his heart and move him toward biblical precepts and principles and that he would take his oath of office seriously.