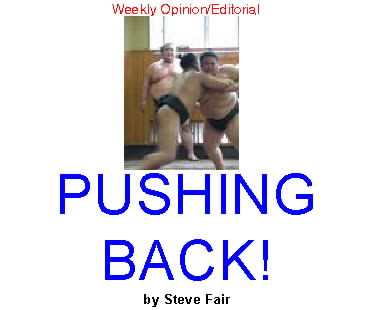 Senator Harry Reid, (D-NV) is the Senate majority leader and has been in a “war of words” with his state’s largest newspaper for quite some time. Last week, Reid took the battle to the next level. Reid told the Director of Advertising for the paper at a public reception that he hoped the paper went broke. He went on to publicly urge advertisers to patronize the Las Vegas Review-Journal’s competition. The paper responded with an editorial calling Reid’s actions “childish.”

Mark Twain said, "Never get into an argument with a man who buys ink by the barrel." Twain was a journalist in his early career and he was cautioning against starting an argument with an editor/publisher of newspapers or other popular print media. Obviously the guy who prints the paper ("buys ink by the barrel") has the tactical advantage in an argument; he cannot only use his pages to espouse his side, he has the means to circulate it widely. That doesn’t necessarily mean the media is always right, but it does mean they have an advantage in getting their message out.
Reid’s actions are inappropriate and unnecessary. The free market system works and will sort this out just fine. Reid doesn’t have to publicly take a stand against a business to hurt a business. If a media outlet gets so out of touch with their market that people stop reading/watching/listening to them, the advertising wanes. They either have to adjust their business strategy or suffer the consequences of their actions, which often means they cease to be viable. It’s a simple case of supply and demand. An elected official’s job is not to tell citizens which products to buy or which businesses to shop at. That is the height of arrogance and displays a mentality that should disqualify them from public service.
This happened once in Stephens County. A former elected official- a Republican- publicly declared “war” on The Duncan Banner after they endorsed their opponent in an election. They encouraged local businesses and organizations to stop advertising with The Duncan Banner and to boycott the paper. The boycott was not effective and the paper obviously survived, but regardless of the outcome of the boycott, the actions of the elected official were categorically wrong. Public officials should not use their position to attack private industry. That is idiotic, unprofessional and un-American. Elected officials work for all of us, including the citizens and media that did not vote for them. But I have to admit watching someone “push back” can be fun.
I was sitting with former business partner and retired Putnam City West High School basketball coach Dick Close in Lloyd Noble in February of 1989 when Oklahoma was playing Missouri in Norman. Both teams were ranked in the Top 5 and the place was sold out. Early in the affair (and with the Sooners losing, 21-8), one of the game's officials asked OU coach Billy Tubbs to take the microphone and speak to the 11,734 in attendance who'd become unruly and had begun to toss items onto the court. Tubbs, who already had one technical foul for arguing with the zebras, did as they asked. When he took the mic, Billy declared, “Loyal Sooner fans, the referees request that regardless of how terrible the officiating is, do not throw stuff on the floor." Tubbs drew his second technical foul of the night, got a standing ovation . . . and OU came back to win, 112-105.
Billy’s “pushing back” fired up the team and the crowd. That is often the goal of an elected official who gets in a tiff with a media outlet- they are looking to fire up the troops. They use that very public outlet to spread their message, often playing the “martyr.” Senator Reid is up for reelection in 2010 and based on recent polling numbers, he needs to fire up his base.
According to a recent Mason/Dixon poll, Reid trails potential GOP Senate candidate Danny Tarkanian by thirteen points. Tarkanian is a real estate broker and former UNLV basketball star. Reid, a four term Senator, has a dismal 37% approval rating in Nevada.
It will be interesting to watch this play out- will Reid fire up his troops like Tubbs did and pull off a come behind victory, or will Tarkanian slam dunk the majority leader in 2010?
Posted by Steve Fair is a Jelly Salesman. at 10:47 AM