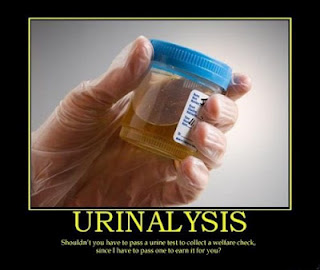 Effective November 1st, the Oklahoma Department of Human Services will begin screening welfare recipients for drug use as a condition of eligibility.  House Bill #2338, authored by five Republican State Representatives- Liebmann, Bennett, Billy, Roberts and Vaughn and State Senator David Holt, (R-OKC), requires DHS to screen adults for drug use who apply for the Temporary Assistance for Needy Families program.  The legislation allows DHS to request a drug test if there is reasonable cause to believe the applicant is illegally using a controlled substance. If the applicant refuses to participate or is determined to be using an illegal drug, they could not receive the assistance.  With the passage of HB #2338, became the fourth state to approve a drug-screening bill this year.
*****

Applicants who undergo a substance abuse treatment program can reapply for benefits six months after the date of the denial. Child-only cases and underage parents are exempt from the drug screening under the legislation and an alternative payee can be named when a parent has been found ineligible for benefits.
*****
“This legislation was carefully constructed with input from numerous lawmakers and was ultimately passed with wide bipartisan support,” said Liebmann, . “Oklahomans don’t want to pay to support illegal substance abuse and this bill will encourage addicts to undergo substance abuse treatment and tax dollars to go to those who are truly needy.”
*****
Governor Fallin signed the bill into law on Wednesday saying, "Drug addiction and illegal drug use contribute to child abuse and child neglect.  They also make it difficult to find and hold a job.  Additionally, HB 2388 helps to preserve the mission of state-funded welfare – to provide a social safety net helping the unemployed and needy get back on their feet, find work and support their families. Unfortunately, drug abuse prevents many recipients of welfare from achieving any of these goals. ...It is important for drug users and those with substance abuse problems to seek treatment rather than simply being handed a check from taxpayers."
*****
Two other states- and – passed similar laws, but their enforcement was struck down by the courts for being unconstitutional.  The fourth amendment protects citizens against unreasonable searches and seizures, but applicants for public assistance do it voluntarily.  They don’t have to seek taxpayer help to get over the rough spots.  They have a choice- apply and don’t use drugs or don’t apply and party on.
*****
This bill was not without its critics.  They claim drug testing for welfare recipients will hurt children and will not help an already desperate situation.  They point out that most drug addicts have to "hit bottom" before they reform and contend living on welfare is "hitting bottom."  They point out that space in cheap or free drug recovery programs is already full and this bill will ultimately hurt people who are already hurting.  Those are valid points and worthy of consideration, but  some folks getting a helping hand from taxpayers agree this bill is needed.  Rick Giacomo of who is a father of two receiving benefits from the state told OKC TV Channel Six that drug testing is a small price to pay for help.  "You're getting free help. I mean, why couldn't you be right and pass and drug test?"  Giacomo asked.  Markeon Harley also receives help from the state and said, "The government is here to help you, not help you get high,"
*****
Critics of the bill point to other addictions- drinking, gambling, smoking- and say many welfare recipients are using our tax dollars to fund those addictions.  That is certainly true, but it is not the taxpayer’s responsibility to fund any addiction.  I’m not convinced it’s the taxpayers ‘responsibility’ to lend a hand to those that need a hand up.   You certainly can’t find that in the US Constitution.  That said, most citizens would support a safety net program to help their fellow citizens who truly need help.  Americans are generous people, but none would support a program that allows drug addicts to use tax dollars to support their habit.    This law is needed, because it will help ‘defund’ the drug business in .

Posted by Steve Fair is a Jelly Salesman. at 9:26 AM