You may want to move to another topic 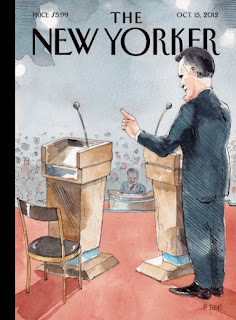 “You may want to move to another topic”
by Steve Fair

The first presidential debate was held last Wednesday evening in Denver and by all accounts Governor Romney won.  In a CNN poll conducted immediately after the debate, 67% of those polled said they thought Mitt won with only 25% saying President Obama won.
*****
“Mitt Romney won the election tonight,” said former Clinton adviser and liberal James Carville. “President Obama looked like a little boy next to Mitt Romney,” said Diane Sawyer. And in a surprising tweet, leftist Bill Maher said, “I am donating one million dollars to the Romney campaign. He’s far better than I ever could have imagined.” Fat chance Maher will donate to Mitt, but it was apparent the prez to his clock cleaned in the mile high city.
*****
One reason Obama did so poorly is because the president has flatly refused to adopt the stance of the incumbent in this campaign.  He has tried to position himself as the insurgent challenger- the Washington outsider- even after nearly four years as President.  He has attempted to run as if his own record were not subject to debate. Thankfully Governor Romney refused to let him get by with that strategy.  When they begin to actually discuss the economic numbers Obama began making multiple blunders and looked confused and annoyed.
*****
One of the bizarre moments in the debate came when President Obama turned to Moderator Jim Lehrer, a liberal, and said, “Jim, you may want to move to another topic.”
That’s something you don’t see in a debate- a participant saying.” let’s quit.”  That’s like saying,” I lost.”  The topic that was being debated was the national debt.  It was clear the President didn’t want to discuss the national debt problem.  The reason is because Democrats have spent the last four years borrowing money from other countries including China to pay for their spending spree at home.  America’s national debt has nearly doubled in four years with four straight years of trillion dollar deficits.  The ballooning national debt crisis is a subject that must be discussed but it appears the president is unwilling to address it.
*****
When the subject moved to health care, President Obama stated he had conversations with Americans about their health care “four years ago,” which would indicate he hasn’t talked to the average Joe about health care since he has taken office. That seems accurate since the Democrats said they would have to pass the health care bill to really know what was in it.  Obamacare is not a popular program.  A Rasmussen poll last week found that 52% of Americans want ObamaCare repealed and only 42% support it.   As Governor Romney corrected pointed out during the debate,  Obamacare has actually increased the cost of insurance so far.  The best comeback the president could come up with on the health care issue was to remind voters--as if they did not already know--that Romney had passed a health insurance law in Massachusetts.
*****
The president even turned his frustration on Jim Lehrer at one point, accusing him of ‘interrupting’ him.  The fundamental problem Obama had during the debate was this was the first time he had been publically challenged on his ideas and policies.  The president is used to having the press throws him slow pitch softball questions so he can hit it out of the park.  In this debate, that wasn’t the case.  He was in the big leagues and when a ninety mile an hour fastball question came his way, he couldn’t get the bat off his shoulder.
*****
Some Democrats offered excuses, among them former Vice President Al Gore who said Obama was possibly suffering from altitude sickness which results from breathing air with lower oxygen content.  Denver’s elevation is 5,280 and it is true that it takes some time to adjust to the higher altitude.  However, that is not why the president lost the debate.  He lost because Governor. Romney had the facts on his side.  Romney addressed the issues, was decisive and came across as a problem solver.  The next debate is in New York at sea level.  Let’s see if the president rebounds from a terrible showing.
Posted by Steve Fair is a Jelly Salesman. at 11:19 AM