The Curse of the Second Term! 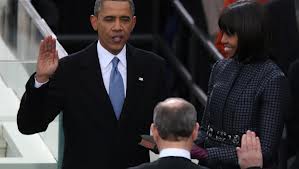 THE CURSE OF THE SECOND TERM!
by Steve Fair

On Sunday President Obama became the seventeenth President to be sworn in for two terms.  The US Constitution requires the President be sworn in on January 20th, so Obama was officially sworn in at the White House on Sunday.  On Monday a public ceremony was held that included celebrities, a parade and lots of pomp and ceremony.

As the President starts his second term as the fourty fourth President of the Republic, the question is; Will he avoid the second term curse?  The term ‘second-term curse’ refers to a phenomenon where the second terms of recent  Presidents are less successful than they were in their first terms.  The second terms of recent presidents have usually been plagued by a major scandal, policy inertia, some sort of catastrophe, or other problems.  Instead of a ‘mandate’ which many second termers think they have after reelection, they instead face challenges from both the opposition Party and their own Party.

President Obama clearly pointed out he wants to forge ahead with climate change legislation and gun control.  He will face major opposition on both issues in the U.S. House.  The President also articulated a theme he has been preaching for over six years:  the rich must pay more taxes, and it is the government’s function to take care of their citizens from cradle to the grave by providing food, clothing, and health care.  It’s not likely the President will change his tune, but Christians should remember two things:

First, it’s important we understand God hasn’t lost control.  He sets up kings and rulers and brings them down.  President Obama’s election didn’t catch God by surprise.  Christians must recognize this simple fact and recognize the authority of the president because he is God’s appointed servant to preserve order and punish evil doers- the primary purpose of government.  You don’t have to agree with the President morally, theologically or politically, and you should point out those areas of difference and stand up against anything that is unbiblical, but throughout the process we should be respectful.

Secondly, Christians should commit to praying for the President daily.  We are commanded to pray for those in authority.  1 Timothy 2:1-2 says,  “I exhort therefore, that, first of all, supplications, prayers, intercessions, and giving of thanks, be made for all men; 2 For kings, and for all that are in authority; that we may lead a quiet and peaceable life in all godliness and honesty.”  Christians should pray the President will make decisions based on the principles and precepts in God’s Word.  We should pray that he take spiritual inventory everyday and recognize that God has His way in the whirlwind.

It remains to be seen if the President falls to the curse of the second term, but his outlined agenda on Monday is one that failed to address the most pressing issue in our country- our out of control spending and national debt.

Posted by Steve Fair is a Jelly Salesman. at 4:58 PM