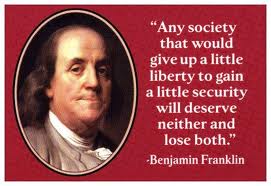 LIBERTY BEFORE SECURITY!
by Steve Fair


The Privacy and Civil Liberties Oversight Board is an independent agency established by Congress to advise the President on concerns with respect to privacy and civil liberties.  The board was established after the 9/11 Commission recommended it to insure that government wasn’t ‘overreaching’ in citizens lives.  It consists of five members appointed by the President.  The Board is authorized to have access to all relevant information necessary to fulfill its role, including classified information consistent with applicable law. The Board is required to report to Congress not less than twice annually.

On Friday afternoon, President Obama met with the board as his administration sought to dispel fear that the US Government had overreached with its surveillance programs of private citizens in favor of national security.  After the meeting, Obama said the board had some “fierce civil libertarians” on the board.  Right!  The board is composed of four former bureaucrats and a Chicago lawyer; all appointed by the President, so it’s not likely they will do anything but what the President wants them to do.
All of this started when former National Security Agency contractor Edward Snowden blew the whistle on the NSA.  Snowden said the NSA had obtained millions of American’s phone records and web communications.  The revelation (while not new) created a media firestorm and the Obama administration has been scrambling to respond.

Here are my observations:

First, this is not the first time the NSA has been accused of spying on private citizens.  Several former NSA top officials as far back as 2005 have been saying basically the same thing Snowden revealed- the NSA has been gathering lots of information on private citizens for nearly a decade.  The reason the government has been able to expand their reach into our lives is because average taxpaying citizens haven’t paid attention to what is happening in their government.  They can blame the politicians and bureaucrats, but they need only look in the mirror to see who to really blame.

Second, Snowden broke federal law.  Whistle-blowing on any national security agency is prohibited unless you spill to a committee of Congress “upon lawful demand.” Not that they are likely to demand it.  Snowden has been alternately called a traitor and a patriot for his actions.  Like a pancake, every story has two sides.  Perhaps Snowden tried to do it right and tell Congress and was stonewalled.  Perhaps he works for China, as some allege.  There are a lot of questions with Edward Snowden that must be answered, but it is an established fact the NSA was gathering the data and his revelation may have awakened the American public on the privacy issue.

Third, the government can not guarantee our personal security.  Any security program is only as good as the human being that designed it and we are all flawed.  After 9/11 there has been a fury of laws passed under the guises of ‘protecting the public.’   We should take reasonable precautions to protect the general public, but understand when government feels it must protect ourselves from ourselves, the line has been crossed.

Fourth, the fourth amendment of the US Constitution guarantees citizens the right to privacy. The Fourth Amendment was has three components. First, it establishes that we have a right to privacy when it states we are able to be “secure in their persons, houses, papers, and effects." Second, it protects our privacy by prohibiting unreasonable searches and seizures.   Third, it states that no warrant may be issued to a law enforcement officer unless that warrant describes in detail "the place to be searched, and the persons or things to be seized."

Some misguided elected officials believe the NSA did nothing wrong, but fellow citizens when we allow the government to monitor our private phone calls, email communication and who knows what else, we have allowed them to violate the fundamental attribute of America- LIBERTY!  Ben Franklin had it right when he said any society who gives up liberty to gain security will have neither!  I know not what course others may take, but as for me, give me liberty before security!
Posted by Steve Fair is a Jelly Salesman. at 8:57 AM