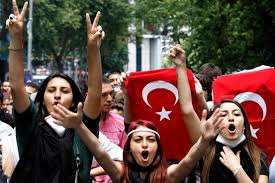 On May 25th, my wife and I marked our 40th wedding anniversary.  To celebrate we took a Mediterranean cruise.  One of the ports of call was Kusadsi, Turkey, a resort community in the south of Turkey.  Kusadasi is near the biblical town of Ephesus and a huge tourist destination.  Because of the recent demonstrations in cities across Turkey, in particular by young people in Istanbul’s Taksim Square, tension was high as we left the ship.  We encountered no protests or witnessed any unrest, but the western influence in Kusadsi was evident.  The food, dress, and mannerisms of the Turks were very western and much different than other Arab countries.

Mark Lowen of the BBC reports that Turkey is becoming even more polarized.  Lowen says, “The divisions here are deepening, which could lead Turkey into paralysis and dangerous waters. The prime minister has lost control of Turkey.”

Turkish Prime Minister Recep Tayyip Erdogan, who has been in power since 2003, has decried the demonstrations.  “These protests that are bordering on illegality must come to an end as of now,” Erdogan said to a large crowd of supporters outside a terminal at Istanbul’s airport Friday.  Erdogan also blamed the escalation of the widespread public protests on "terror groups" which he lumped in with leftist parties and members of his political opposition.

But political observers believe Erdoganjust doesn’t get the reason for the protests.

Bahar Leventoglu, Assistant Professor of Political Science and Economics at Duke and a native of Turkey says, “A lot of people now see Erdoğan’s policies as a ‘cultural war’ against their lifestyles, and see the government’s so-called ‘Taksim project’ as an extension of this cultural war.  Erdogan also has no tolerance for criticism. He believes that he knows what is good and what is bad for citizens of Turkey, and so we have to obey him as if we are teenagers being disciplined by dad. I’m sure he was taken by surprise by the protests against the government, as Turkey does not have a long history of this. But times are changing, and Erdogan is behind the times in this one.”

In a strange twist of events, on Monday Turkey's president defended the right of citizens to protest, in strong contrast to the dismissive stance of the prime minister.  Meanwhile police used tear gas for a fourth day in an attempt to disperse demonstrations that grew out of a sit-in to prevent the uprooting of trees at Istanbul's main square.  He likely sees an opportunity to be the next Prime Minister if the protestors are successful in their achieving their demands.

On Monday, Erdogan again dismissed the street protests as being organized by extremists, described them as a temporary blip and angrily rejected comparisons with the Arab Spring uprisings.
Turkey is different from other Islamic countries.  Even though most of the population is Islam, their constitution provides for freedom of religion, but less than 2% of the population of Turkey is Christian.

Turkey borders Iraq and Iraq Prime Minister Nouri al-Maliki said that his government was worried about the security implications of the situation in Turkey, saying the country was "an essential part of the stability of the region."  "We believe that resorting to violence will widen the circle (of violence) ... in the region, and we call for restraint," he said.

Turkey has been trying to join the European Union since 2005, but because of widespread accusations of human right violations have not been admitted.  While western in many ways in their culture and government, their leaders still cling to an authoritarian, totalitarian style of government.   It is highly unlikely the Turkish government will be able to stop the liberty movement in their country.  It’s a part of human nature to crave liberty and to be self governed.

Posted by Steve Fair is a Jelly Salesman. at 5:33 PM