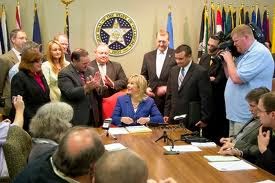 In this year’s legislative session, the Oklahoma legislature passed and Governor Fallin signed into law, Senate Bill # 1062.  The bill replaced Oklahoma’s adversarial court-based worker’s comp system with an administrative system, similar to those in other states.

The NCCI reported state businesses will see a projected average of -14.6 percent decrease in loss costs starting January 1. The NCCI credited the decrease to the workers compensation reforms in SB #1062.  That means there will be more money available to Oklahoma businesses for expanding their business, which translated means more jobs for Oklahomans.

“Oklahoma continues to be a leader by proving to the country that conservative pro-business policies lead to economic growth and prosperity,” Shannon said.  “By replacing an archaic adversarial system with a modern administrative system, we have opened the doors for employers and employees to settle claims in a fair and affordable manner. Businesses will see a reduction in costs and injured employees remain protected.”

Not all Oklahoma legislators believe workers comp reform is a good thing for Oklahoma.  On Tuesday, a lawsuit was filed with the Oklahoma Supreme Court asking the high court to determine the constitutionality of SB # 1062.  The suit was filed by Senator Harry ‘Turn’ Coates, (R-Seminole), State Representative. Emily Virgin, (D-Norman), and Rick Beams, president of the Professional Firefighters of Oklahoma.
“As a longtime      businessman, I recognize that it’s necessary to have workers compensation rates as low as possible,” ‘Turn’ Coates said. “In fact, I believe we need a workers compensation administrative system, just not the unconstitutional and unworkable system created by Senate Bill 1062.”

The lawsuit alleges the new workers comp commission violates the state constitution’s separation of powers; that the law discriminates against certain classes of workers; and that it excludes certain injuries and conditions from compensation.  It also invokes the state constitution’s ‘single subject’ provision.  The suit names Gov. Mary Fallin, who signed the bill and Attorney General Scott Pruitt as defendants.
Fallin said she was disappointed by the legal challenge. “For decades, Oklahoma has one of the most expensive and inefficient workers compensation systems in the country, a constant obstacle for business owners looking to expand operations or create jobs,” Fallin said. Oral arguments are set for October 16.

This suit is just a continuation of recent challenges to conservative legislation.  Lawmakers just concluded an unnecessary special session to address lawsuit reform after the Oklahoma Supreme Court found that a measure passed in 2009 was unconstitutional because is supposedly violated the ‘single subject’ rule.  Judicial activism is alive and well in the Sooner state.

It’s time lawmakers placed a state question on the ballot to return the selection of all Oklahoma state civil, criminal and supreme court justices to a direct vote of the people.  Justices should have to run on a partisan ballot.  Party affiliation is your first vote and voters should know if they are voting for a liberal or a conservative.
Posted by Steve Fair is a Jelly Salesman. at 12:09 PM