Term Limts and Balance the Budget! 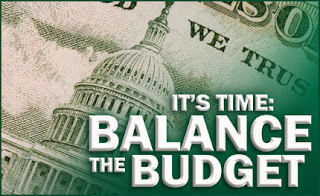 TERM LIMITS AND BALANCE THE BUDGET!
by Steve Fair

The federal government of the United States operates on an annual budget that runs from October 1st to September 30th.  Each year, Congress (both chambers) authorize/budget each department or government agency to spend a specific amount of money and then the President signs the budget.


The Budget Act of 1921 requires the President submit his ‘Budget Proposal’ to Congress by the first Monday in February.  President Obama has only met that deadline once – in 2010.  This year he was sixty five (65) days late.


With much and often heated debate, both chambers of Congress hack away at the president’s Budget Proposal to come up with its own version, known as the Budget Resolution. Like any other piece of legislation, the House and Senate versions of the Budget Resolution have to match.  Roughly one-third of the spending in the federal budget is “discretionary” spending, meaning it is optional. Just for your information, spending for Social Security and Medicare is referred to as “mandatory” spending.


No doubt you have read or heard about the 2014 budget and the funding/defunding of the Affordable Care Act- aka Obama Care.  House Republicans want to delay funding the controversial program and keep the existing government running.  Senate Democrats has taken the stance they will not compromise.  The Ds have said either pass the bloated, wasteful budget with Obama Care intact or they will shut the government down.  Three observations:


First, the 2014 budget has a huge amount of wasteful spending in it and it is not limited to just the ACA.  The problem is government spending as a whole.  Lawmakers should be trying to identify waste in ALL the budget and eliminate it.  That is a more permanent solution than passing CRs.  In fact, the CR agreement the US House has proposed violates the Budget Control Act and funds the federal government at a higher rate than last year.


Second, registered Democrats and Independents should be as concerned about the government spending problem as Republicans.  Our current federal government spending trajectory is not sustainable.  America is broke.  When the economy collapses because America can’t pay her bills, it will impact everyone regardless of political affiliation.


Finally, what’s the harm in delaying implementation of the Affordable Care Act for a year?  It’s clear that a majority of Americans do not approve of the takeover of healthcare by the federal government and oppose it.  The most frequently asked question on the website for the ACA is; “How can I be exempted from the ACA?”   A majority of the states have refused to set up health care exchanges, so that proves the ACA is a not a popular program.  By delaying it allows government to work out some of the kinks in the law.


What is the long term solution to our budget woes?  Two amendments to the U.S. Constitution would help.  The first is a ‘balanced budget’ amendment.  Congress and the President must be forced to spend no more revenue that what is collected.  No family can spend more than they make and prosper long-term.  The federal government violates that simple common sense principle each and every year.  All U.S. States except Vermont have a balanced budget amendment.  If it’s good enough for the states, it’s good enough for the feds.  We can't expect our elected officials to show discipline in spending our money.  They have proven time and time again they don't understand simple economics.
The second amendment is for term limits (12 years) for members of Congress (unless they are serving prison terms).  Our founding fathers never meant for elected officials to be career politicians, but the political ‘industry’ (lobbyists/consultants/policy hacks/big donors/elected officials) has become one of the most corrupt and incestuous businesses in the country.  Incumbents win over 95% of the time, so it's hard to get 'new blood' elected.  It's time to send the career politicians home to get a real job and to live in the real world.