SOUNDING BRASS OR A TINKLING CYMBAL! 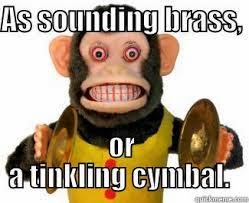 HJR 1025 authored by Speaker Jeff Hickman, (R-Fairview) passed the State House last week.  If it is approved by the State Senate, the measure will be placed on the ballot in November 2016.  HJR 1025 would prohibit former legislators from going to work for any state agency until July 1 of the year immediately following their leaving office.  The current statute prohibits an Oklahoma state lawmaker from taking a job with the state until two years have elapsed from their leaving office.  A couple of observations concerning Speaker Hickman’s proposal;
First, Hickman’s bill does plug the current ‘loophole’ several former legislators have crawled through.  At least three former Republican legislators went to work for state agencies before the two year period had expired because their salary was not being funded with ‘legislature appropriated’ dollars.  The Attorney General issued an opinion the law wasn’t technically being broken, because their salary wasn’t coming from money given to the agency by the legislature, but that dog won’t hunt.  While they may ‘technically’ be within the bounds of the law, it is clear the spirit of the law was to provide a two year ‘cooling off’ period for former legislators.  Hickman’s proposal would close that loophole.  No matter how the job was funded- appropriated money or otherwise- a former state legislator would have to wait basically a year and a month to go to work for the state.
Second, Hickman’s proposal reduces the amount of time a former legislator has to wait before they go to work for the state.  As mentioned above, the current prohibition period is two years.  Hickman’s proposal would slice that almost in half.  Is that an improvement?  Does the prohibition need to be two years?  Are state government agencies so desperate for labor they need the cooling off period to be shortened?  Fact is, many former legislators wind up lobbying their former colleagues, either as a private lobbyist or a taxpayer funded lobbyist (don’t get me started on the absurdity of a taxpayer funded lobbyist) before two years.
Third, why is it that so many former legislators wind up working for the state or lobbying?  Can they just not get a job in the private sector?  Have they become so engrained into the good-ole-boy political system they believe the only way they can provide for their families is to stay engaged at some level in politics?   In Oklahoma, we have former elected officials are college presidents, state agency heads, and cabinet members.  Others are now county elected officials.  Precious few go back into the private sector.  The plow doesn’t fit their hand anymore.  The irony is many of these former legislators who go to work for the state after they leave office railed on the size of government during their campaigns and proclaimed they were ‘citizen legislators’ when they were running for office.  Sounding brass and tinkling cymbal.
We so need citizen legislators and elected officials.  In 450 BC, Cincinnatus was a Roman citizen and a humble farmer.  He was elected to the Roman Senate, served his term and then went back to farming.   In 458 BC, Rome was in a war with Sabines and a group of Roman Senators were sent to Cincinnatus to ask him to serve as Emperor/Commander-in-Chief.  He consented, led the army into a successful battle, ended the war and returned to his farm- all in the period of fifteen days.  In 439 BC, he was once again summoned to duty, this time to squelch a coup.  He did his duty and returned to the plow.  Cincinnatus became a legend in Rome, simply he understood that politics was merely a means to an end- not the end.  He wasn’t a career politician.  George Washington is often compared to Cincinnatus because after leading the colony army, Washington also refused the opportunity to become the superior ruler/king of the United States, also retiring to a farm.
Speaker Hickman’s proposal closes the ‘appropriated money’ loophole that is being abused by former legislators.  Quite frankly that is more important than the length of the cooling off period.  Contact your state senator and encourage them to support HJR 1025.
Posted by Steve Fair is a Jelly Salesman. at 12:49 PM