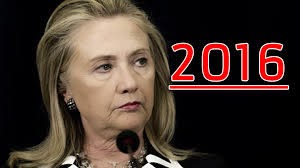 CLINTON HAS IMPRESSIVE RESUME,
BUT SHORT ON ACCOMPLISHMENTS!
by Steve Fair
On Sunday, Hillary Clinton announced she is a candidate for the Democrat Party’s nomination for President.  It came as no surprise, since she has been hiring campaign staff and mapping strategy for quite some time.  “I’m running for president,” she said with a smile near the end of two minute video.  “Everyday Americans need a champion. And I want to be that champion,” Mrs. Clinton said. “So I’m hitting the road to earn your vote — because it’s your time. And I hope you’ll join me on this journey.”  Clinton is the presumptive nominee of the Democrat party and leads VP Joe Biden in early polls 65% to 12% among primary voters.  For those in the Republican Party who think that Clinton can’t win the presidency, consider the following: 53% of the voters in the 2012 election were women.  Women turn out and vote.  In the last eight presidential general elections, women have a higher turnout percentage than men.  Hillary is touting her gender this time around, unlike when she ran against Obama in 2008.  Women tend to vote more readily for women.  Clinton has a built-in definitive advantage simply because of her gender.  She also has the ability to raise massive amounts of money.  It’s reported she plans to have a 2.5 billion dollar campaign budget.  But while Hillary can win, she does have significant negatives.
First, a recent CNN polls showed the public don’t view her as “honest and trustworthy,” after it was revealed that she has used a personal email address and home-based server to conduct U.S. State Department business.  Hillary’s excuse that she used one email account so that she could carry just one phone for ‘convenience,’ is inconsistent with what she said just two weeks ago.  She is quoted as saying she now ‘carries two phones.’  Hillary also claims she didn’t send any classified information over her personal account during the years she was SOS, but that can’t be verified because she will not allow an independent examiner look at the server that stores her email because it also has Bill Clinton’s on it.  Reportedly, Bill Clinton doesn’t use email at all, so that story is inconsistent.
Second, the killing of four Americans at the U.S. Embassy compound in Benghazi in 2012 while Clinton was Secretary of State is viewed very negatively by the general public.  Clinton’s lack of a timely response to a request by the American ambassador for more security resulted in Congressional hearings where she was viewed as condescending and arrogant.  That might play well with her base, but the general public saw her as heartless and dismissive to legitimate questions from members of Congress.
Third, Clinton’s political shelf life is close to expiration.  If elected, Hillary would be 69 when inaugurated.  That would be the same age Ronald Reagan was when he was first elected, but Hillary isn’t Reagan.  She doesn’t have his charisma or communication skills.  Reagan was in great physical shape for a man his age- Hillary has experienced numerous health issues. Younger voters are not going to be energized by Hillary and increasingly milleniums(voters between 18-26) are becoming a critical demographic to winning an election.  Hillary isn’t ‘new’ and that is an important characteristic for a successful political candidate.  She has been on the political scene for 25 years and that is an eternity in politics.
Fourth, Hillary is dull.  She is boring.  Of all her negatives, this may be the one that will hurt her the most.  Her body movements are calculated and she shows little spontaneity.  Her speech pattern is monotone.  That is why Barack Obama was able to beat her in the 2008 primary.  Being more engaging and fun is vital in today’s social media driven campaigns.
Clinton has an impressive resume, but her list of actual accomplishments is short.  Conversely, her list of scandals is long. Republicans have multiple candidates more qualified and trustworthy to be POTUS.
Posted by Steve Fair is a Jelly Salesman. at 7:45 PM