Long time journalist left great example of how to engage in politics & life! 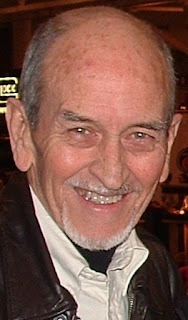 A TRIBUTE TO MIKE MCCARVILLE!
by Steve Fair

Last week Mike McCarville died.  Mike was a long time Oklahoma journalist who maintained The McCarville Report blog.  He had been involved in Republican politics for decades.  He worked for President Reagan, U.S. Senator Dewey Bartlett and others.  Mike was a long time radio broadcaster, hosting Open Mike Live on KTOK for years.  He used to say he had a face made for radio and that he never had a bad day.  I met Mike many years ago for lunch at 50 Penn Place.  At that time, I was co-hosting a weekly radio talk show with former State Representative Dennis Johnson.  The two hour show was broadcast on Saturday mornings on two stations in southwest Oklahoma.  Mike had heard about it and wanted to meet me and offer a little advice.  He gave me some sage advice that day over lunch- ‘have fun on air while educating the public.’  The “Darrell & Leonard’ show heeded that advice- we took the cause seriously, but not ourselves.  Mike graciously agreed to call the show periodically and offer his take on what was happening in the world of politics- always with a pinch of humor and always with common sense insight.  He continued calling in even after Dennis left the airwaves and Georgia Williams replaced him and the show rebranded as ‘The Grapevine.’
After five years, I left the airwaves and started a blog.  Mike was already online with the McCarville Report.  One day, he contacted me and asked me if he could put a link to my blog on his site.  I was honored.  The McCarville Report was and is widely seen as the source for insider political news in Oklahoma.  I put a link to his site on my blog as well.  Periodically he would post a link to an op/ed I wrote on his site,
Mike and I were causal friends, not close friends, but we had a kindred spirit because we both believed that being engaged in the political process doesn’t mean you have to walk around with a sour expression on your face.  You don’t need to look like you were weaned on a dill pickle and have the seed hung in your teeth.  Mike had fun.  I have always maintained that if you take the fun out of politics, you lose people who are the most needed in politics- people who are well rounded and understand they aren’t going to get out of life alive.  Two important principles we could all learn from Mike’s life:
First, he believed in civil discourse. Mike wasn’t afraid to tee it up with you on a controversial subject.  In fact, he loved to debate, but he was always civil, respectful of another’s opinion, and fair.  Far too many journalists, activists, and political leaders believe it is us vs. them.  Debating to them is not quietly listening to another person’s perspective and then presenting your viewpoint, but rather interrupting, yelling and belittling the other person’s view instead of presenting the merits of your own argument.  I was taught when selling my product to sell the features, advantages and benefits of the product, not run down the competition.  Comparison selling was considered a breach of civility.  Civility in our society is being lost because winning has become more important than principle.  Winning is important, but how you win is important.  Mike was unwilling to lie, cheat and steal to win.  He had to win on principle.
Second, he believed in having fun.  When he was on the radio, he coined clever nicknames for his news anchor, his traffic reporter and producer.  He was jovial, enthusiastic and engaging on air.  McCarville drew people to him because they knew he was having fun.  In our current political environment, people aren’t having fun.   You ask the average citizen about the political climate and ‘fun’ will be the last adjective they will use to describe it.  Some mistakenly think people like McCarville can’t be taking the cause seriously if they are laughing and joking, but nothing was further from the truth.  McCarville’s decades long commitment to conservative causes in Oklahoma is undeniable and while he labored for the cause he was having fun.
Few too many of our elected officials and Party leaders fail to understand the simple principle that you can take the cause seriously and still have fun.  You can still present your side of the story and be respectful of others who disagree.  Mike McCarville mastered that balance. Please pray for Mike’s wife, Ann, and the rest of the family during their time of loss.
Posted by Steve Fair is a Jelly Salesman. at 9:06 AM