All Americans should be concerned about government deficit spending! 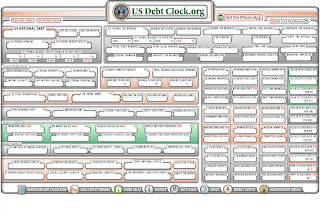 NATIONAL DEBT IS AT CRISIS POINT!
by Steve Fair
President Donald Trump has some pretty significant accomplishments in his first two years.  He has appointed two members of the SCOTUS.  Unemployment is at a forty nine year low.  Manufacturing jobs in the U.S. are growing at the fastest rate in three decades.  In foreign policy, the POTUS has opened a dialogue with North Korea, moved the U.S. embassy in Israel to Jerusalem, and withdrew from the one-sided Iran treaty.  Trump approved Keystone and Dakota Access pipelines.  The POTUS and Congress passed the largest tax cut in U.S. history.   Few presidents in modern history have accomplished as much as Trump in their first two years.  One thing he hasn’t tackled is the national debt.
According to USdebtclock.org, The current U.S. national debt is $22 trillion dollars.  That is 76% of the total Gross Domestic Product (GDP)- the highest ever in non-wartime.  The debt equates to $180,000 liability per taxpayer.  The U.S. federal government budget deficit is $6.1 trillion dollars annually and growing.  Last year the federal government spent $4.28 trillion dollars, but only collected $3.37 trillion.  In the past twenty years, federal government revenue collections have increased by 80%, but spending has increased by 148% during that same period.  The interest on the national debt is $479 billion and the interest rate is expected to double over the next four years.
Two thirds of the national debt is held by the public.  The federal government owes it to buyers of U.S. Treasury bills, notes and bonds.  That includes individuals, companies and foreign governments.  The other one third is the government borrowing from itself.  They raided social security for years, but as baby boomers retire over the next few years that cookie jar is going to become empty.  America’s debt is the largest of any country in the world.  It is about the same as the 28 member European Union.
During the 2016 presidential campaign, then candidate Trump said he would eliminate the nation’s debt in eight years, but based on the first two years, that is not likely to happen.  He promised to grow the economy by 6% annually, therefore increasing tax revenue and to find waste and to cut government spending.  There has been little cutting of government.  Based on current projections, President Trump will spend at about the same rate as President Obama.
How does the U.S. national debt affect the average American?  First it slows economic growth.  When the debt to GDP ratio gets over 75% for an extended period, interest rates rise and the dollar starts to lose value vs. other currency.  Consumers pay more for products that are imported.  Food and gasoline prices rise.  The government has to set aside more money to service the interest on the debt and core services are often affected.
The national debt issue is not a partisan one.  Members of both Parties must agree that our current rate of deficit spending is not sustainable.  The national debt has reached crisis mode.  President Trump and Congress must address the federal government out of control spending before it bankrupts America.
Posted by Steve Fair is a Jelly Salesman. at 3:12 PM