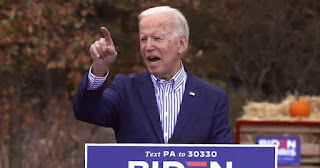 "I represent all of you, whether you voted for me or against me. And I'm going to make sure you're represented," former Vice President Biden said when asked during the presidential debate on Thursday what he would say during his inaugural address to Americans who did not vote for him.  That’s the way it should be.  Elected officials should work to represent all their constituents, not just those who voted for them or those who donated to their campaign.  Biden’s answer to the question was statesmanlike, but he clearly didn’t mean it.

On Saturday during a drive-in rally in Pennsylvania, the former VP said, “We don’t do things like those ‘chumps’ out there with the microphones, those Trump guys.”  He was referring to a large group of Trump supporters who were in a nearby parking lot flying ‘Trump’ flags and honking their horns to attempt to disrupt Biden’s rally.  Chump is defined as a person who is easily tricked: a stupid or foolish person.  Biden calling Trump supporters, ‘chumps,’ continues a long line of derogatory names Democrats have given their opponent’s backers.  In 2016, Hillary Clinton called Trump supporters ‘a basket of deplorables.’  In 2008, President Obama said voters(conservative Democrats) in old industrial towns decimated by job losses were ‘bitter, and cling to guns and religion.’

Biden’s statement of representing all Americans when elected was disingenuous.  It was one of several false statements he made at the debate.  Let’s look at three others:

Falsehood #1: “I never said I oppose fracking,” Biden said.  But he did.  At several of the Democratic primary debates he said that very thing.  “We would make sure it’s(fracking) eliminated and no more subsidies for any fossil fuel,” Biden said.  Fracking is the process of injecting liquid at high pressure into subterranean rocks, boreholes, etc. so as to force open existing fissures and extract oil or gas.  It has allowed oil and gas companies to dramatically increase production and resulted in the United States becoming energy independent.  Critics claim fracking can destroy drinking water supplies, pollute the air, contribute to the greenhouse gases that cause global warming, and trigger earthquakes.  Biden’s environmental policy statements on his website clearly oppose fracking.  He knows taking a public stand will cost him votes.

Falsehood #2: “They did not lose their insurance unless they chose [that] they wanted to go to something else,” Biden said.  But that’s not true.  4.7 million Americans immediately lost their insurance when the Affordable Care Act became law because their carrier discontinued their health plan.  The discontinued plans were not allowed under the ACA because they didn’t meet the minimum coverage.  They had no choice in the matter.  They lost their coverage.

Falsehood #3: “There is no evidence that when you raise the minimum wage, businesses go out of business. That is simply not true,” Biden said. But it is true.  A Harvard business study examined the impact of a one dollar increase in the federal minimum wage and found it would lead to a 14% increase in the likelihood a local restaurant closing.  The study found it hurt small businesses much more than larger chain operations.  Biden is a career politician and doesn’t understand simple economics.  Any expense incurred by a business is ultimately passed on to the consumer.  Taxes and mandated wage increases result in price increases.  Businesses don’t pay taxes and wages- consumers do.

When asked at the debate what he would say during his second inaugural address to Americans who did not vote for him, President Trump said, “Success is going to bring us together. We are on the road to success."  Sounds a little like, ‘a rising tide lifts all boats.’

Posted by Steve Fair is a Jelly Salesman. at 7:17 PM