IT AIN'T PERFECT, BUT IT PROVIDES A WAY TO FUND MEDICAID EXPANSION- VOTE YES ON SQ#814! 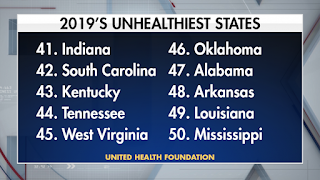 On November 3rd, state question # 814 is on the ballot.   It was placed there by a Joint Resolution passed by the legislature.  It involves the Oklahoma Tobacco Settlement Endowment Trust (TSET).   In 1996, Oklahoma and 45 other states across the country sued tobacco companies for targeting youth. They ultimately settled with big tobacco for a combined $200 billion over 25 years.

In 2000, Oklahoma voters amended the state constitution and created TSET- the first state to protect their tobacco settlement money in a constitutional trust.  The trust is governed by a seven member board, each appointed by an elected official.  Currently 75% of the annual payment from the tobacco companies is deposited into the trust, the legislature gets 18.75% and the AG’s office gets 6.25% to handle enforcement of the agreement.  TSET only spends the annual ‘earnings’ from the trust each year.  In 2019, TSET earned $ $69,766,822, which was distributed as described above.  The trust balance as of June 2019 was $1.3 billion.  SQ#814 would change the percentages of distribution.  If approved, the legislature would receive 75% of the earnings from TSET, the trust 18.75% and the AG’s office’s share wouldn’t change. The legislature wouldn’t have free reign to use the monies, but it would be earmarked for Medicaid expansion.  Three observations:

First, Oklahoma’s Medicaid expansion will place a heavy budget on the state budget.  After its passage June 30th, SQ 802 expanded Medicaid in the state to cover eligible working age adults who live in poverty.  It mandated the coverage be done by next July.  The only problem is it didn’t provide a funding mechanism.  If SQ#814 passes, it will generate an estimated $60-70 million annually to help cover the costs of Medicaid expansion.  Estimates on how much the expansion will cost the state are estimated at $164 million annually.  Governor Kevin Stitt said, “ In my opinion, (SQ814) needs to pass.  We need to redirect some of those funds to the legislature so we can actually pay for Medicaid expansion.”

Second, there is not universal support for SQ#814.  While TSET(a state agency) doesn’t take an official position on the SQ, they released a statement warning that smaller payments into the trust will hurt future efforts to fund their primary mission to curb tobacco use among youth.  Thomas Larson, spokesman for TSET said, “With less money going into the endowment, the endowment is not going to grow as quickly, especially when we have a downturn in the economy. Not only would that affect our ability to stand up new programs or expand existing programs, a sharp economic downturn that lasts for a while could impact current programs."  TSET spends about 1/3 of their share of the earnings each year on advertising to reduce smoking in Oklahoma.  In a 2016 survey commissioned by TSET of six states, results showed substantial reduction of smokers and Oklahoma doing better than the other five.  There are those who fear future legislatures will attempt to circumvent the restrictions and use the money for something other than Medicaid. That would never happen in Oklahoma, right?

Third, Oklahoma’s health ranking is low.  The United Health Foundation (UHF) rankings are often cited.  They claim the Sooner state dropped from #43 to #47 in 2019 in overall health due to the high number of uninsured citizens.  UHF is a foundation funded by UnitedHealth Group, a health insurance carrier, so take their rankings with a grain of salt.  Determining the overall health of a state is difficult, but TSET’s own internal data shows our state to have high rates of cancer, heart disease and strokes compared to other states.

When voters approved SQ#802 expanding Medicaid and put it in the state constitution, the legislature is required to fund that expansion.  While not a perfect solution, SQ#814 does provide that funding mechanism.  Let’s hope future legislatures will also use it as directed.  Vote Yes on SQ #814.

Posted by Steve Fair is a Jelly Salesman. at 2:28 PM

And what happens if the Medicaid package doesn’t get funded? Why should we decide again to “rob Peter to pay Paul”? Legislators should be responsible for offering a package to voters that has no funding source. Where are the lawyers who are allowing these flawed, inadequately written measures to go to the voters?

The SQ was done by Initiative Petition. It was not originated in the legislature. I understand your angst and it is a mute point since it failed. Thanks for reading.