Price Fixing is not Free Market! 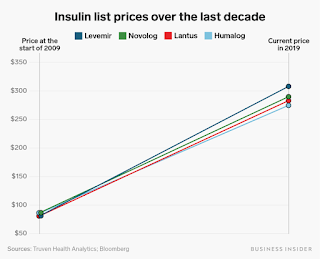 More than 200,000 Oklahoma adults suffer from type 1 diabetes, including my wife.  Diagnosed at age ten, she has lived with the disease for 59 years.  Type 1 diabetics requires daily usage of insulin.  Diabetes is the seventh leading cause of death in Oklahoma.  Oklahoma has the fourth highest age-adjusted diabetes death rate in the nation.  Diabetes is the leading cause of blindness, amputation, heart disease, kidney failure and early death.

Sen. Frank Simpson, (R-Ardmore) and Rep. Randy Worthen, (R-Lawton) authored House Bill#1019, which passed the Senate last week 32-15.  It passed the House 94-2.  Simpson’s granddaughter lost her life to complications related to Type 1 diabetes and he is passionate about helping diabetics.  The bill now heads to the governor’s desk where it is expected to be signed.  Three observations:

First, a recent U.S. Senate report found the current convoluted drug pricing system drives price increases.  The report from the offices of Sen. Chuck Grassley, (R-Iowa) and Sen. Ron Wyden, (D- Ore) found Novo Nordisk and Sanofi, the two largest insulin producers in America, closely monitored each others pricing and matched or topped any increase within hours or days of each other.  In other words- price fixing.

The two Senators introduced legislation aimed at capping seniors out of pocket costs for drugs covered by Medicare.  It would also limit price increases on a drug to the rate of inflation.  It did not get a floor vote, because many Republicans oppose it because they feel the bill is too regulatory and goes against a free market. “There is clearly something broken when a product like insulin that has been on the market longer than most people have been alive skyrockets in price,” Grassley said.

Second, the report blamed pharmacy benefit managers (PBMs) as part of the reason for the high prices for insulin.  These middlemen negotiate with drug companies on behalf of insurance plans, large employers and other payers for discounts.  PMB’s decide is a certain drug will be covered by a plan.  Drug makers offering large rebates have a better chance of being covered by a health plan.  PBMs charge fees and paid a percentage of re rebate based on the drug’s ‘list’ price.  Insulin producers are thereby incentivized to increase the price so PBMs can get larger rebates.  “This industry is anything but a free market when PBMs spur drug makers to hike list prices in order to greater rebates and fees,” Grassley said.

Third, there is a reason insulin is so expensive?  Here are the main three: (1) Only three companies control 90% of the insulin market worldwide.  In the past 15 years, the price of insulin has tripled and the three producers raise prices together.  We need more insulin producers in the U.S. to bring the price down.  (2) There is no generic insulin.  Insulin is a biologic rather than chemical.  It can’t be produced generic in the same way as other drug.  Creating a generic insulin costs nearly as much as making a new drug.  Because of that cost, the few insulin generics available cost just 10-15% less than the branded product. (3) The ‘evergreening’ of the patents on insulin are loopholes in the patent system.  They allow insulin producers to keep patents longer than the normal 20-year period.  For example, Sanofi, the maker of Lantus has created the potential for a competition free monopoly for 37 years.

If signed by the governor, HB#1019 will cap the price in Oklahoma for a 30-day supply of insulin to $30 for each covered prescription.  Several other states have passed similar legislation. HB#1019 will not only save many diabetics money, but it could save their life.

Posted by Steve Fair is a Jelly Salesman. at 7:50 PM