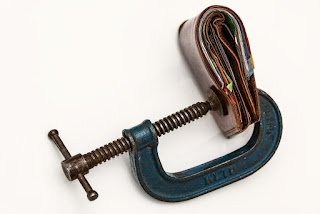 INFLATION IS A MUGGER!

Inflation occurs when the purchasing power of the dollar declines.  When the price of a basket of selected goods and services rise due to increased costs to produce the good and service, inflation happens.  For years, economists have believed increased US government economic policy(regulations/restrictions/intervention) would keep inflation to a minimum.  But in the past six months, major grain. oilseed and edible oil prices are at historical highs, crude oil prices are at six times the year ago level and freight rates are up +25%.  Food prices according to the USDA have increased by 3-4% each month since March.  Investors are nervous and Wall Street has stalled.  Consumers are seeing increased prices at the shelf and at the pump.  Inflation has returned and it is the result of bad economic policy.  Three observations:

First, some inflation can be healthy for an economy if it is a by-product of a growing economy.  But it needs to be controlled and temporary.  The current inflation trend is neither.  Criticism of President Biden’s economic policies comes from not only Republicans, but Democrats as well.  Lawrence Summers, former Secretary of Treasury in the Clinton administration and a former economic advisor to President Obama says President Biden’s stimulus plan has been the driving force behind recent inflation.  Summers says Biden and his policies are causing “inflationary pressure of a kind we have not seen in a generation, with consequences for the value of the dollar and financial stability.”

Second, President Biden’s economic policy is not free market driven.  By continuing to send citizens stimulus checks and unemployment payments, Biden has hurt the economy.  Employers across America can’t get people to work because they can stay home and make as much money not working.  Promoting laziness, idleness and sloth is not good economic policy.  The cornerstone of Biden’s economic policy is tax increases and more government spending, which he believes will get inflation under control.  President Reagan said, “People who think a tax boost will cure inflation are the same ones who believe another drink will cure a hangover.”

Third, millennials have no reference point in regard to economic inflation.  Before most of them were born, in the late 70s and early 80s, inflation was out of control in the U.S.  In 1975, the annual inflation rate was 10.1%.  It was 9.6% in 1981.  Home mortgage rates were over 10% APR.  In 1980, President Jimmy Carter was defeated by Ronald Reagan, primarily because of inflation and the economy.   President Reagan took a three-pronged approach to curbing inflation; (1) Reduced government spending on domestic programs, (2) Reduced taxes, and (3) Reduced the burden of regulations on businesses.  During Reagan’s two terms (8 years), the U.S. economy was turned around and inflation brought under control, using supply side economic policy.

The real issue with inflation is wages don’t increase as fast as consumer prices increase.  That hurts consumer confidence and stalls the economy.  President Reagan said, “Inflation is as violent as a mugger, as frightening as an armed robber and as deadly as a hit man.”  Hopefully the inflation rates of 40 years ago will not be seen again, but socialist economic policy coupled with more government regulation could make that possible.

Posted by Steve Fair is a Jelly Salesman. at 8:13 PM