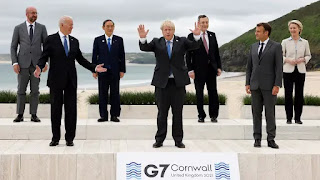 In 1973, then Secretary of Treasury George Schultz convened an informal meeting of the five top economic democracies in the world in order to discuss how to get inflation and monetary exchange rates under control.  That group evolved to became the Group of Seven(G7), an inter-governmental political forum that seeks solutions to issues of trade, security and economics in the world. The seven countries- Canada, France, Germany, Italy, Japan, the United Kingdom(UK), and the United States account for 10% of the globe’s population, but have 60% of the world’s net wealth and one third of the worlds GDP.

This past week, President Joe Biden made his first out of the country trip since being elected, attending the G7 summit in England.  He said the gathering was ‘an extraordinarily collaborative and productive meeting.’  He went on to say that his engagement with the other leaders in the G7 was met with ‘genuine enthusiasm.’  Biden announced at the meeting that American taxpayers will pay for 500 million coronavirus vaccine doses to be used throughout the world.  The president pressed the group to push for a minimum 15% corporate income global tax.  A point of fact; corporations don’t pay taxes, consumers do.  Corporations simply pass taxes and fees onto their customers in the form of price increases. Biden also walked back President Trump’s demand that European countries pay their fair share in NATO.

“America’s back in the business of leading the world alongside nations who share our most deeply held values.  I think we’ve made progress in reestablishing American credibility among our closest friends.” Biden said.  Three observations:

First, most of the members of the G7 do not share the U.S.’s most deeply held values.  America is a democratic republic founded on a specific written document.  The US constitution grants unprecedented and very specific rights to American citizens.  It is codified(written down/systematized).  In the UK the constitution is uncodified(unwritten).  The British form of government allows parliament to enact laws no other body can challenge.  Most of the members of the G7 are democratic socialist nations, with similar forms of government to the UK.  Most despise capitalism and a constitutional republic form of government.

Second, a friend doesn’t let you pay their bills.  The reason President Trump wasn’t popular among G7 leaders was because he pushed them to pay their fair share.  The North Atlantic Treaty Organization (NATO) was founded to stop the Soviet Union from propping up shadow governments in Europe after WWII.  It was to be funded by the member nations.  Since it’s formation, the US has foot the bill.

In 2014, after some pressure, Germany agreed to spend 2% of GDP on their military defense, but have never spent more than half that.  Germany, and 27 other nations in the alliance, allow United States taxpayers to fund 70% of the cost to protect Europe.  Those types are called freeloaders, moochers, bloodsuckers, leeches or parasites, but certainly not friends.

Third, America’s credibility took a hit at the G7.  During President Trump’s term, he called out the member nations unwillingness to pay their fair share.   Credibility involves trustworthiness, integrity, and character.  Biden’s return to the same ‘open checkbook’ policies of the Obama years were met with enthusiasm, but rest assured the other six members of the G7 respected and feared America more under the Trump administration.

In its infancy the G7 forums served a purpose- to stabilize the world’s out of control inflation and fluctuating currency exchanges.  G7 still deals with those issues but its primary initiative has moved to spending taxpayer money on global initiatives that have little to do with economic stability.  G7 is an organization pushing a global agenda using the US as little more than an ATM machine.

Posted by Steve Fair is a Jelly Salesman. at 7:50 AM