The intolerance of the tolerant is magnanimous! 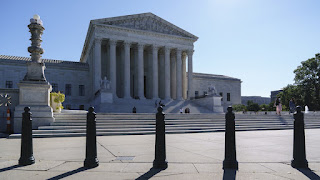 On Monday May 2nd, Politico, a Virginia political journalism organization founded in 2007, obtained and released a 98-page draft document that indicated the U.S. Supreme Court (SCOTUS) is poised to strike down the landmark Roe vs. Wade(1973) and Planned Parenthood vs Casey(1992) decisions.

On Tuesday morning, SCOTUS Chief Justice John Roberts confirmed the draft opinion was authentic, but stressed the opinion was ‘not a final decision by the court.’   Roberts vowed the leak would not undermine the integrity of the court’s operations and vowed to have the U.S. Marshal service investigate the leak.

The draft opinion was written by Justice Samuel Alito. Alito, 72, was appointed to the SCOTUS by President George W. Bush and has served on the high court since 2006.   Alito is considered one of the more conservative members of the SCOTUS.

Alito wrote, “Roe was egregiously wrong from the start.”  He said nowhere in the U.S Constitution does language exist that supports the right to abortion and the issue should legislated by the states.  While Alito wrote the draft, it can safely be assumed the draft represents the view of the majority of the conservative justices.  Three observations:

First, liberals leaked the draft.  Pro-abortion advocates clearly have the most to lose.  Firing up their crowd was the objective and it has been effective.  Since the leak, the SCOTUS building has been surrounded by pro-abortion demonstrators.  President Biden has condemned the draft, calling it a radical decision.  Liberal talking heads claim if killing babies in the womb is outlawed, it will be the end of life as they know it.  The intolerance of the tolerant is magnanimous.

The most likely source of the leak is a law clerk for one for the court’s liberal justices who wants to make Alito’s majority opinion public in the hope that public backlash could change one of the conservatives on the court to change their vote.  Liberals are floating the idea the leak came from the conservative side to put pressure on the conservative judges to lock in their vote.  The total number of people who had access to the draft is about 50.  The liberal justices most likely to leak are Justices Elena Kagan, Sonia Sotomayor and Stephen Breyer.  Whatever the source, a leak like this is unprecedented.  If the leak can be traced back to a justice, they should be impeached.  Expect a thorough investigation into the source of the leak, investigators to reach no definitive conclusion and thus no punishment for the leaker.

Second, if Roe vs. Wade is overturned, it came too late for 63 million babies.  That is the estimated number of children who have been killed in the womb since the 1973 decision.  The U.S. aborted more than 1 million annually between 1975 and 2012.  Abortion on demand helps foster a culture that devalues life.  Mother Teresa said, “The greatest destroyer of peace today is abortion, because it is a war against the child.  If we accept a mother can kill even her own child, how can we tell other people not to kill one another?”

Third, the leak strategy could work.  Chief Justice Roberts said the draft is not the final decision, which could indicate further deliberations on the case could be in the works. Justice Brent Kavanaugh is said to be the least conservative of the conservatives on the court and the pro-abortion crowd will do everything in their power to get him to flip his vote.  Conservatives should hold off on celebrating until the actual decision is released (expected in June).  Conservatives have been stabbed in the back by so called conservative judges before.

With high fuel and food prices and the stock market in decline, Democrats needed an issue that will get their vote out.  Nothing fires up liberals and gets them to the polls like killing unborn babies in the womb.

Posted by Steve Fair is a Jelly Salesman. at 1:51 PM