"KEEP YOUR EYE ON ONE THING- AND ONE THING ONLY: HOW MUCH GOVERNMENT IS SPENDING!" 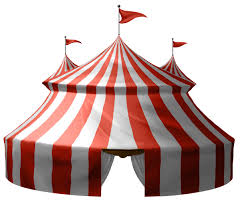 IN THE CENTER RING!

A ‘big tent’ is a phrase used in reference to a political Party permitting or encouraging a broad spectrum of views among its members.  Instead of enforcing a determined ideology/platform, those in the ‘big tent’ are tolerant of those they disagree with.  Those who believe in the Republican ‘big tent,’ follow Ronald Reagan’s credo the person who agrees with you 80% of the time is your friend and not a 20% traitor.

Today both the Republican and Democratic Party ‘big tents’ look more like a circus tent than a place to gather and unite.  Tolerance of another person’s differing viewpoint is considered weakness.  Respect for an opposing opinion is frailty.  Loud is the name of the game in the tent.  Elected officials and candidates must be roaring, deafening and thunderous or they are considered weak.  Insults, name calling, and slander project strong convictions in the Party tabernacle.   Substance, truth and humility are secondary attributes.  Anger, wrath and fury reign.  Details of how to fix all the issues in America are foggy in both of the major Party tents.  Here are three observations all Americans, no matter what Party affiliation, should agree on:

Government spending financed by higher taxes reduces personal incentive to start a new business or expand an existing one.  Redistribution of wealth by government fosters a culture of dependency and depresses risk taking.

Until true fiscal conservatives are elected to office, the deficit will continue to grow.  Nobel prize winner in Economics, Milton Friedman said, “Keep your eye on one thing and one thing only: how much government is spending.”  American government spends too much money and has no plans to slow down.  Until voters begin to hold elected officials accountable for the out of the control spending, it will be business as usual.  The national debt crisis is real and threatens the very way of life in America.  It is not discussed or addressed in campaigns because it’s not booming enough.  It doesn’t fire up the troops.

Second, government isn’t to be trusted.  In a Pew Research Center poll conducted in June, public trust in government is near historic lows.  Only 29% of Democrats trust their government to do what’s right.  Among Republicans it is 9%.  In 1958, 75% of Americans trusted government.  How did government become so untrustworthy?  Reducing of personal liability, increased regulation, unfulfilled campaign promises contributed to the lack of confidence in government. Promises of reduced regulations, taxation are made during campaigns to be quickly forgotten once sworn into office.

Both political Parties have allowed their ‘big tents’ to become entertainment.  Purity tests have been established to ensure those allowed to enter the tent maintain the ideological purity of the Party, but once in the tent, little serious discussion on issues that unite are conducted.  It’s more fun- but less productive- to argue in the tent.  Ladies and Gentlemen, now in the center ring, The Polarizing of America!