VOTING IS A SACRED DUTY! 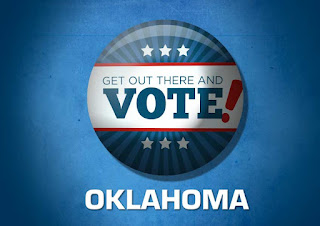 VOTING IS A RESPONSIBILITY!

Less than one third (31.6%) of registered Republicans voted in the June 28th primary election.  There were races in all but two of the nine statewide offices on the ballot, two U.S. Senate races, Congressional races, and dozens of legislative and local races so it wasn’t like voters didn’t have something to vote on.  But just 360,000 of the Sooner state’s 1,138,947 registered Republicans made the effort to cast a ballot in the primary.  Because the state is very Republican, the victors in the GOP primary are almost assured victory in the General election.  There are 2,252,101 registered voters (all Parties) in Oklahoma.  That means 16% of the people registered made the decision for 100% of the four million residents.

If social media is any indication of political interest in Oklahoma, turnout should have been around 95%, but it wasn’t.  Why?  Is interest in government and politics waning in Oklahoma?  Are people just turned off by the lack of ethics in politics?  Both could be true.  Three observations:

First, the average Republican in Oklahoma is fed up with the constant political rhetoric.  All they see  on social media are keyboard warriors debating, insulting and berating fellow Republicans- but they also quote scripture.  The fact is the average butcher, baker and candlestick maker is too busy trying to make a living to engage in political discourse that accomplishes nothing.  The average Joe isn’t interested in style.  They want substance.  The loud and proud don’t impress them.  They want specifics on what gets Oklahoma and America out of this mess.  Because they never get real answers, they wrongly have brought into the premise the cause is lost, so why should they vote.

Second, being fed up with inaction doesn’t release a citizen from their responsibility.  Voting is not just a sacred right; it is a responsibility.  Showing up makes a difference.  It may seem like every candidate and elected official is the same and only interested only in self-promotion.  But when only one third of eligible voters show up for a major primary, two thirds shirked their responsibility.  776,000 Oklahomans registered in the Grand Old Party didn’t do their duty June 28th.  Those Republicans have an opportunity to redeem themselves for that neglect on August 23rd .

There are five statewide races in just two weeks: August 23rd .  Former Oklahoma Speaker of the House T.W. Shannon is pitted against Congressman Mark Wayne Mullin for the unexpired U.S. Senate term.  Rep. Todd Russ and former Sen. Clark Jolley are in a runoff for state treasurer.  Ryan Walters and April Grace are opponents in the state school superintendent race.  Former Rep. Todd Thomeson and Sen. Kim David are vying for the corporation commission and current Labor Commissioner Leslie Osborne and Rep. Shawn Roberts are in a runoff for the office currently held by Osborne.  In the next two weeks, some Republican voter mailboxes will be full- the ones who usually show up.  The campaigns won’t waste their money sending a mail piece to an infrequent voter, but if that voter started paying attention, things could get interesting.

Third, there is no excuse for not voting.  Oklahoma has in person absentee early voting the Thursday, Friday and Saturday before the Tuesday election.  The polls are open from 7am-7pm on Election Day.  A voter can apply for an absentee ballot.  There is simply no excuse for not voting in the Sooner state.  Unless providentially hindered, a citizen should never neglect their responsibility to cast their vote.

Posted by Steve Fair is a Jelly Salesman. at 1:36 PM