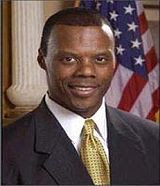 Illustrating Government Missteps
by J.C. Watts Jr.
The federal government’s crisis response and oversight capabilities have taken quite a beating lately. Its reaction, or lack thereof, to Hurricane Katrina confirmed for many that the federal government was asleep at the switch in the aftermath of a terrible natural disaster. More recently, the meltdown in the financial services sector has exposed severe weaknesses in the federal government’s ability to recognize and act expeditiously to confront a major economic crisis. No wonder there is apprehension among many over the government’s stepping in with a massive $700 billion bailout, necessary though it might be.
The government’s belated and disjointed attempts to "fix" problems can result in unintended if not detrimental consequences. One such example is the Uniformed Services Former Spouses Protection Act (USFSPA). Enacted in 1982, the USFSPA permits state courts to include a military service member’s retirement/retainer pay as common property in a divorce proceeding thereby making it subject to garnishment. The government’s well intended purpose was to afford some security for ex-spouses, most of whom were women, after a divorce from the breadwinner.
As often is the case, however, when government intervenes, well intended does not necessarily mean well thought out. The USFSPA remedy served its purpose, but it did not anticipate the greater opportunities women would achieve through the years both within and outside the military. As the ranks of women in the armed services have swelled, more and more female soldiers, sailors, and airmen have experienced the consequences of the USFSPA by having their retirement/retainer pay garnished in a divorce settlement. A law that in large measure was supposed to protect women has been siphoning away an income source that many women, as well as men, expected to be there as promised in return for their service to their country.
The USFSPA is demoralizing to many service men and women whose marriages have undergone the stresses and strains common to a life of sudden deployments and prolonged separations. Many find themselves fighting a "two-front war" -- one far from home in the defense of their country and another on the home front to protect a benefit they have worked hard to earn for years of dedicated service. Some of the USFSPA provisions are puzzling and contribute to a perception that the government creates more problems than it solves. For example, a soldier’s retirement/retainer pay is awarded to a former spouse, yet when the ex-spouse remarries, gets a job, or otherwise achieves financial security after the divorce, they still continue to receive the service member’s pay. This skews the original intent of the law when the Act becomes a mechanism to gain a second or even third income source in addition to the ex-spouse’s own salary and that of their new spouse. In these instances the law can facilitate the decision to divorce since it allows for a financially attractive alternative to keeping the marriage intact.
Another peculiar aspect of the USFSPA involves how garnished retirement/retainer to a former spouse is calculated. The amount is figured not on the length of the marriage (what seems logical) but generally on the service member’s rank and time in grade at retirement. This means, for instance, that a service member, say, a first lieutenant, who divorces after a three-year marriage and retires 17 years later as a colonel will have retirement/retainer pay garnished at the level of his or her rank at retirement, not at the rank when the marriage ended nearly two decades earlier.
Compounding these frustrations are the uncertainty and inconsistency in the way the law is applied. When can a service member expect to stop making payments? Well, the law provides no sunset date so payments continue in perpetuity until the service member or former spouse dies. Uniform implementation is another problem. State divorce laws are as varied as the judgments rendered by state courts. Courts often award payments greater than what is allowed by the USFSPA because of a complete lack of federal oversight standards to ensure that state courts abide by the restrictions in the law.
Government actions, whether focused on a natural catastrophe, an economic crisis, or the welfare of our men and women in uniform, sometimes prove to be shortsighted. Like the USFSPA, they can unintentionally end up hurting people. The USFSPA at the very least ought to be reexamined. Perhaps it needs to be scrapped altogether with an eye towards crafting a measure more in tune with the times -- something better conceived and fair to all which mitigates the monthly net increase of 364 veterans between April and October of this year that had their retirement/retainer pay garnished for life. This represents just another example of government’s good intentions gone awry.
J.C. Watts Jr. is a former Member of Congress. He represented the 4th District of Oklahoma for eight years. This column will appear in newspapers throughout the U.S. on Saturday December 6, 2008.
Posted by Steve Fair is a Jelly Salesman. at 7:31 AM