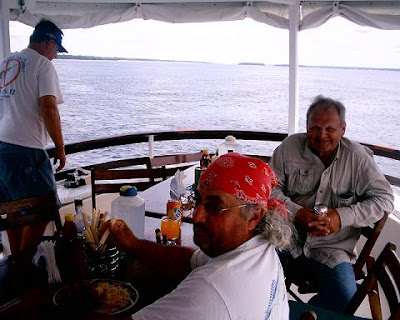 Weekly Opinion/Editorial
FISHING FOR TORT REFORM!
by Steve Fair
The American Tort Reform Association released their annual report this week and Oklahoma is on the “watch” list. The ATRA has been around since 1986, and is dedicated to reforming the civil justice system through tort reform. This is the fifth year Oklahoma has been cited as a state that needs lawsuit reform. ATRA acknowledges that Oklahoma has a “bright side,” because more supporters (Republicans) of true tort reform were elected to the state legislature last month.

When Republicans took control of the State Senate for the first time in state history last month, it gave rise to the possibility we will finally get true lawsuit reform in the Sooner state. A lot however will depend on whether Governor Henry will sign what he says he wants in tort reform. Last year, he vetoed a bill with most of the provisions he said he supported on tort reform. Then five months later, he took a fishing trip to Brazil with several trial lawyers, including three past Presidents of the Oklahoma Trial Lawyers Association. When questioned about it, Henry said, “They were old family friends.”

The Trial lawyer lobby did all they could to keep the GOP from taking the State Senate this year. They contributed thousand of dollars to political candidates with three of every four dollars going to Democrats. Most of the money contributed to Keith Erwin and Daisy Lawler’s failed races against GOP incumbents in southwest Oklahoma—Don Barrington and Dennis Johnson—came from the trial lawyer lobby. Seventy percent of the money contributed to Nancy Riley’s race came from trial lawyers. Riley was the Democrat Senator who switched parties in the middle of her term because she lost the Lt. Governor’s GOP primary race. A staggering $865,000 was spent by the two candidates in that Senate race, with most of it coming from outside the Senate district. Riley’s contributions were slightly more than Dan Newberrry, who beat her easily.

A PAC known as the Working Oklahomans Alliance PAC has contributed over one million dollars in the past decade to dozens of House and Senate members and candidates—mostly Democrats. In August, The Oklahoman ran a story that stated many of the “working Oklahomans” were unaware they were contributing to a political action committee. According to Elsa Tewolde, who is listed as giving $80 to the WOA PAC, “They didn’t tell me.” “It makes me very upset because it’s deceptive.” Another client Rose Smith of Oklahoma City said she got a Working Oklahomans Alliance card after her attorney took a political donation out of her workers' comp settlement. "I didn't know about it until I got there,” she said. "I didn't like it.” Reportedly, the State Ethics Commission is investigating the WOA PAC.

Our country’s $246 billion civil justice system is the most expensive in the industrialized world. Aggressive personal injury lawyers target certain professions, industries, and individual companies as profit centers. They systematically recruit clients who may never have suffered a real illness or injury and use scare tactics, combined with the promise of awards, to bring these people into massive class action suits. They effectively tap the media to rally sentiment for multi-million-dollar punitive damage awards. This leads many companies to settle questionable lawsuits just to stay out of court.

These lawsuits are bad for business; they are also bad for society. They compromise access to affordable health care, punish consumers by raising the cost of goods and services, chill innovation, and undermine the notion of personal responsibility. The personal injury lawyers who benefit from the status quo use their fees to perpetuate the cycle of lawsuit abuse. They have reinvested millions of dollars into the political process and in more litigation that acts as a drag on our economy. Some have compared the political and judicial influence of the personal injury lobby to a fourth branch of government.

Opponents of Tort Reform say the issue is a very elaborate, and successful, propaganda war being financed by those who maim and kill others and yet do not want to be held responsible for their actions. They say there is no evidence that tort reform helps the average person. That is simply not true. Tort reform directly results in decreased insurance premiums for both health care professionals and individuals. Tort reform is not a release from liability, but a common sense approach to accountability. Tort reform will not benefit ambulance chasing trial lawyers and that is the primary reason they are fighting tooth and nail to stop it in Oklahoma. If we plan to move Oklahoma forward, we must have meaningful tort reform and soon.

The key will be Governor Henry and his stance on this important issue. Contact Governor Henry by phone at 405.521.2342 or by email through his website at http://www.governor.state.ok.us/message.php. Urge him to stop fishing and start helping Oklahoma by working with Republicans on meaningful tort reform.
Posted by Steve Fair is a Jelly Salesman. at 9:25 AM