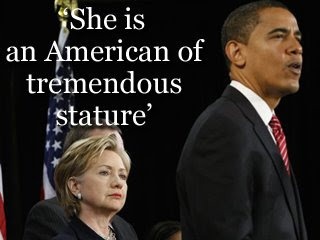 Weekly Opinion/Editorial
Madam Secretary?
By Steve Fair
Senator Hillary Clinton, D-NY, has been announced as President elect Obama’s Secretary of State designate. The Secretary of State serves as the President's principal adviser on U.S. foreign policy, conduct negotiations relating to U.S. foreign affairs, and a lot more. The office was created in 1789 and while it hasn’t expanded, our changing world has made it arguably one of the most powerful jobs in our government.

So this is a promotion for Hillary. To insure the NY? Senator doesn’t face the same intense scrutiny Secretaries Rice and Powell did in Senate confirmation hearings, Former President Clinton has agreed to disclose the full list of contributors to his Presidential library foundation. Because the Senate is now in Democrat control and also has a history of giving their “colleagues” an easier time in hearings than they do other appointments, Hillary’s confirmation is virtually a lock. But it shouldn’t be.

President Clinton’s ties to foreign governments have been a concern of Americans for years. During the Democrat primary Hillary faced questions about the source of the money for her husband's presidential library. During a September debate, moderator Tim Russert asked the Senator whether her husband would release a donor list. Clinton said she was sure her husband would "be happy to consider that," though the former president later declined to provide a list of donors. The Washington Post confirmed numerous seven-figure donors to the library through interviews and tax records of foundations. According to a December 2007 in The Post, “Several foreign governments gave at least $1 million, including the Middle Eastern nations of Kuwait, Qatar and the United Arab Emirates, as well as the governments of Taiwan and Brunei.” “The Saudi Royal family gave Clinton ten million,” The Post concluded.

New York Daily syndicated columnist, Michael Goodwin says, “I think the issue of Bill Clinton still isn't resolved.” “And, you know, this is something Obama raised on the campaign trail, Bill Clinton's disclosure of the contributors to his presidential library and to his foundation and to the paid speeches that he gives around the world.” “Bill Clinton has raised $500 million and we generally do not know where that money has come from.”

In an April 2008 story, The LA Times wrote, “ The former president's charity has raised more than $500 million over the last decade.” “His reliance on influential foreign donors and his foundation's refusal to release its list of donors have led to repeated questions about the sources and transparency of his fundraising -- even as Hillary Clinton has talked on the campaign trail about relying on him as a roving international ambassador if she is elected president.”

It was clear that in 1996 that Communist China was trying to funnel money to the Clinton/Gore campaign. Charlie Trie, one of Bills trusted DNC fundraisers, attempted to funnel this money. When faced with indictment he fled to China for refuge. Another money funneler for the communists and Clinton campaign, Johnny Chung, is now in jail. The funds came from divisions of the Chinese army, one of which had been caught only months earlier while attempting to smuggle AK-47's to LA street gangs. The Chinese are not an ally of the U.S.

The Cox Report was issued in 1998 and headed by Congressman Chris Cox, R, CA. It revealed that China was actively spying on the United States and had been stealing top-secret nuclear weapons plans for two decades. Worse, Clinton was informed of the espionage problem months and years in advance of it breaking to the public yet did absolutely nothing about it and even continued to transfer other technology and pursue close relations with China.

Two of the U.S. companies named in the report – Loral Space and Communications, headed by Clinton donor Bernard Schwartz and Hughes Electronics, headed by Clinton donor Michael Armstrong, were successfully prosecuted by the federal government for violations of U.S. export control law, resulting in the two largest fines in the history of the Arms Export Control Act. Loral paid a $14 million fine in 2002, and Hughes paid a $32 million fine in 2003.

Since he left office, Clinton has continued to make money from his foreign government contacts. It’s been reported that two-thirds of the former president's income from speeches—more than $27 million, including $6.6 million in 2006—has been for speaking engagements overseas.
Is Hillary Clinton qualified to be Secretary of State? I don’t think so. Her husband’s involvement with foreign governments has placed the security of our nation in jeopardy. One of Hillary’s most effective campaign ads was the 3am ad. In the ad, she asks, "Would he be ready for crises around the world?" Perhaps she should ask—where is Bill? Making a speech for seven figures in China? That’s more destructive than his playing around with an intern and it impacts all Americans!
Posted by Steve Fair is a Jelly Salesman. at 8:42 AM