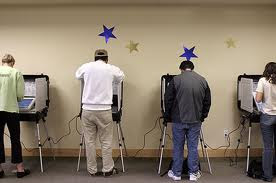 “Hi, I'm Average Voter. Does anyone want to represent me?”
by Steve Fair
The Oklahoman had another op/ed this morning attacking conservatives. This time they took a swipe at newly elected Insurance Commissioner John Doak and State Auditor and Inspector Gary Jones for being what they described as 'partisans.' They fail to mention that Insurance Commissioner Kim Holland, Doak's opponent, was an OBAMA delegate to the Democrat National Convention. You can't get more 'partisan' than that.
*****
Jones' opponent, State Auditor Steve Burrage, maxed out in contributions to John Edwards for President and contributed heavily to Democrats. That's pretty 'partisan.' The op/ed praises some organization called 'No Labels' http://nolabels.org/ that advocates governing from the center. You can read the entire editorial at http://newsok.com/no-labels-movement-an-effort-to-restore-center-in-u.s.-politics/article/3519447
*****
The head of No Labels is Mark McKinnon, a GOP political ad consultant from Texas who is also a country songwriter. McKinnon is nothing less than a political 'hired gun,' who has little or no convictions. He quit the McCain campaign because he thought the election of OBAMA would be good for the country. Now that's not PARTISAN? McKinnon is just trying to create a business environment for his ad consulting business with Democrats because he knows he has burned a bridge with Republicans.
*****
The Oklahoman's op/ed writer's ultimate conclusion is the 'average' voter in Oklahoma will not be represented by all these GOP PARTISANS that were elected to statewide office and the legislature on November 2nd.
*****
What is a Partisan? A Partisan is defined as 'someone who is devoted to or biased in support of a party, group, or cause.' Partisans are people of conviction who are devoted to a cause. When did having strong character and firm convictions become a political liability?
*****
As I have stated repeatedly on this blog(See WHY FAIR &BIASED to your right), EVERYONE IS BIASED-EVERYONE IS PARTISAN. The person who doesn't recognize that fact is woefully ignorant or intelligently dishonest. Our views, values, and opinions are all filtered through the prism of our life experiences, education, culture, and theological views. The key is to know what is right and more importantly to know the ONE who knows what is right.
*****
Back to the editorial- just who is this average voter The Oklahoman is talking about? Here are seven(7) characteristics of the AVERAGE Oklahoma voter who voted so PARTISAN on November 2nd and what those voters expect from their newly elected Oklahoma government:
*****
First, they are decidedly against government intrusion in their lives. They want a government that is small and efficient. They recognize that taxes and regulation on business gets passed down to the consumer and that fosters a hostile environment for business.
*****
Second, they want government to be transparent. They want an honest government. They are sick of backroom deals, corruption and cover ups in both Parties.
*****
Third, they want government to provide a safe environment to raise a family. That means funding law enforcement and keeping lawbreakers behind bars.
*****
Fourth, they want a government that provides infrastructure (roads, bridges) so they can travel safe and so business can transport goods to market.
*****
Fifth, they want a government that will uphold the tenets of the U.S. and Oklahoma constitutions equally for all people. That means taking a stand on the 2nd amendment, illegal immigration and other issues that create an 'environment and culture of integrity.'
*****
Sixth, they want elected officials to be risk takers and think outside the box. They don't want some 'center of the road/go along to get along' joker whose only concern is reelection. That's why Tom Coburn is so popular in Oklahoma- he's a Partisan and he is a risk taker.
*****
Seventh, they want a government that listens to everyone, not to just a few select 'big donors,' or elitist whose only goal is to control the agenda of government to benefit their financial interests. They are sick of elected officials who come to their town and talk ONLY to their donor base to the exclusion of the average citizen.
*****
You will note I did not mention the average voter wants the government to help them get a job. Most of them recognize the government does a terrible job 'recruiting' industry. If government will just get out of the way and let the free market system work, business will do just fine in our state.
******
On another note, what the AVERAGE OKLAHOMA NEWSPAPER READER should expect from their paper is honest reporting without a 'sour grapes' op/ed everyday because their hand picked candidates didn't win an election.
Posted by Steve Fair is a Jelly Salesman. at 12:06 PM