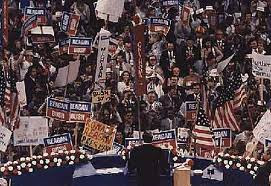 HOW TO BE A DELEGATE!
by Steve Fair

Last week five(5) Democrats and seven(7) Republicans filed to be on Oklahoma’s presidential primary ballot March 6, 2012. The seven GOP candidates are the ones you would expect, but only one of the Democrats is a household name- President Obama. You can see the entire list of presidential candidates at http://www.ok.gov/elections/support/ppp_filing.pdf
*****
The presidential primary is used in Oklahoma to allocate delegates to the two major parties presidential nominating conventions. Fifteen states use a causus system to select their delegates, which is different from a primary. A caucus is a system of local gatherings where voters decide which candidate to support and select delegates for nominating conventions. A primary is a statewide voting process in which voters cast secret ballots for their preferred candidates and the parties use those results to commit delegates. There are advantages to both. Caucus systems tend to attract people who are more engaged and knowledgeable in the political process. Primaries often are won by the candidate with the biggest media spend. There has been an active movement in the Oklahoma GOP to go to a caucus system, which I have opposed. We (the GOP) should be about the business of educating not excluding the general public on issues and candidates. The issue has been soundly defeated at our last two state conventions.

*****
I am unsure how Oklahoma Democrats select the delegates to their national convention, but the Oklahoma Republican Party uses the following process.
*****
Oklahoma has 43 delegates to the 2012 National GOP convention in Tampa, more than New Hampshire and Iowa combined- they total 40. The Sooner state delegation is the nineteenth largest at the convention. Three of Oklahoma’s delegates are unpledged- the members of the Republican National Committee. Fifteen(15) of the state’s national delegates are elected at the five congressional district conventions(3 each) held before the state convention. The remaining twenty five(25) delegates are elected at the state GOP convention May 12, 2012 in Norman. Delegates, who are most often elected officials or political activists, pay their own expenses to the national convention. The competition to become a GOP national delegate is often fierce.
*****
Delegates don’t get to just freelance and vote for whomever they want. Oklahoma Republican Party rules require national delegates to sign a pledge they will vote in accordance with the party rules and state law. A delegate is an elected representative who is to vote based on the results of the presidential primary held on March 6th.
*****
In years past, Oklahoma was a ‘winner take all’ state which meant that a Republican candidate could win a plurity of the vote in the presidential primary and take all the delegates. Earlier this year, the Oklahoma Republican state committee voted to allocate national delegates in 2012 on a ‘proportionate’ basis, meaning that more than one candidate could have national delegates from Oklahoma. Several other states switched from ‘winner take all’ to proportionate allocation of delegates which changes the dynamatics of the nominating process.
*****
With all the hype in the national media, you would think the race to the GOP nomination will be over by the time Oklahomans get to vote in March, but that is highly unlikely. In order to win the Republican nomination, a candidate must have 1,145 delegates. The earliest a candidate could hit that number is March 6th when eleven states vote and select 556 national delegates. The first three causas/primaries are Iowa, New Hampshire and South Carolina. Only 65 national delegates will be chosen in those states. The real test will be on January 31st in Florida when 99 delegates are chosen. It is highly likely the GOP nomination process will be drawn out well into April of 2012.

*****
Want to be a delegate representative to the Republican National Convention? Any registered Republican in the state is eligible. The best place to start is by attending your precinct meeting on Monday February 6th and the County GOP Convention in March. District Conventions, where delegates are actually elected, will be held in April and the State GOP convention is in May. Being a part of the presidential nominating process is educational and fun, but it also carries a burden of responsibility. GOP Delegates in Oklahoma represent 850,000 fellow Republicans across the state.
Posted by Steve Fair is a Jelly Salesman. at 10:10 AM