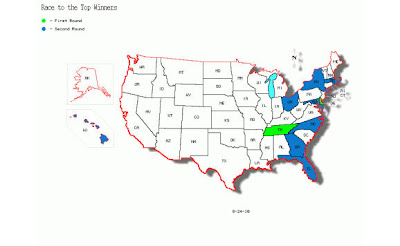 LOSING IS A BLESSING!
by Steve Fair
On Friday, USA Today reported nine states will share $500 million in federal grant money won in a high profile competition intended to jumpstart improvements in early childhood programs. The money is part of the Obama administration's cornerstone education initiative, ‘Race to the Top’ which had states competing for federal dollars to create programs that make schools more effective. Last year, Race to the Top handed out $4 billion in grants focused on K-12 education. Oklahoma education leaders requested $60 million of federal funds
*****
The goal of this year’s competition was to get more children from birth to age 5 ready for kindergarten. Because Oklahoma has a solid record in early childhood programs, Governor Mary Fallin and State Superintendent Janet Barresi were confident the Sooner state would win, but Oklahoma was not one of the nine states. The Sooner state finished a dismal #30 out of 37.
*****
In May when the program was announced in D.C., Tulsan George Kaiser, a major supporter and contributor of President Obama, shared the stage with Education Secretary Arne Duncan and Health and Human Services Secretary Kathleen Sebelius and emphasized Oklahoma had done an excellent job in early childhood development. Kaiser’s involvement is probably why Oklahoma leaders were confident they would win, but instead California, Delaware, Maryland, Massachusetts, Minnesota, North Carolina, Ohio, Rhode Island and Washington were the nine states. All just happen to have Democrat governors- just a coincidence I’m sure.
*****
Gov. Mary Fallin and State Superintendent Janet Barresi expressed disappointment in not being awarded the grant. “Despite today's news, Oklahoma remains a leader in the field of early learning. With over 70 percent of our 4-year-olds participating in some form of early learning program, it will continue to be important to develop and improve our prekindergarten services,’’ Fallin said.
*****
Barresi said, “I join Gov. Fallin in a shared commitment to continue to find ways to boost learning opportunities for Oklahoma preschoolers, especially for those living in poverty. Our reforms depend a great deal on academic success in the early grades.’’ Barresi said the state must ‘redouble’ its efforts to ensure its children are ready to learn when they enter kindergarten.
*****
First, is it the responsibility of government to insure that children are ‘prepared’ to enter kindergarten? Obviously Fallin, Barresi and Kaiser believe educating children from the cradle is a function of government. So does former Oklahoma first lady Kim Henry. Henry, executive director of Sarkeys Foundation, says, “There is no disputing that parents are the best educators for their young children. But just as indisputable is the fact that many parents are not equipped for the job. In my 10 years as a teacher, I saw firsthand that the kids who stood to benefit most from early learning were the ones who faced a host of disadvantages.” While Henry, Barrei and others may be sincere and truly want to help out parents who need help, it isn’t the responsibility of government to prepare children for kindergarten? That is exclusively the role of the parent.
*****
Second, isn’t it fiscally irresponsible to accept federal tax dollars that include a multitude of ‘strings’ and conditions no matter how just the cause? With the overreaching, ever expanding federal government it doesn’t seem very wise for Oklahoma state leaders to embrace any federal program that expands the reach of government. What is particularly disappointing is when Republican elected officials run on a platform of fiscal responsibility and then line up at the federal government trough immediately being elected. It is little wonder Oklahoma citizens are confused and see little difference in the two parties.
*****
Losing the ‘Race to the Top’ grant is an early Christmas present for Oklahoma. Oklahoma government leaders need to be helping ‘families’ by reducing the size of government, building and maintaining our infrastructure –road and bridges-, creating a better environment for businesses to operate and reducing the individual tax burden. That is the proper role for government, not trying to get kids out of the home as soon as they are born.
*****
Robert Frost was an American poet. He is highly regarded for his realistic depictions of rural life. Frost said, “You don't have to deserve your mother's love. You have to deserve your father's. He is more particular.... The father is always a Republican towards his son, and his mother's always a Democrat. “
*****
Merry Christmas!

For other articles on this subject, clink on
USA TODAY
http://www.usatoday.com/news/education/story/2011-12-16/race-to-the-top-winners/52005184/1
CAPITAL BEAT OKLAHOMA
http://capitolbeatok.com/_webapp_4106279/Fallin_finds_Obama_grant_decision_%E2%80%9Cdisappointing%E2%80%9D_%E2%80%93_Superintendent_Barresi_presses_for_more_spending,_board_edges_forward_on_evaluation_model
Posted by Steve Fair is a Jelly Salesman. at 10:28 AM