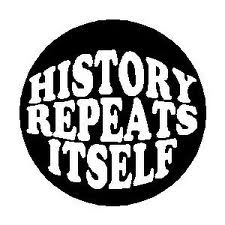 HISTORY REPEATS ITSELF!
by Steve Fair

The American diplomatic embassy at Benghazi Libya was attacked on September 11, 2012 by a heavily armed group of Islamic terrorists. The attack began during the night at a compound that is meant to protect the consulate building. A second assault in the early morning the next day targeted a nearby CIA annex in a different diplomatic compound. Four people were killed, including U.S. Ambassador Chris Stevens. Ten others were injured. The terrorists who attacked the mission have not been captured.  Initially, the Obama administration said the attack was nothing but a violent protest and not the work of terrorists.

According to CNN, an e-mail discussion about ‘talking points’ the Obama administration used to describe the deadly attack on the U.S. compound in Benghazi, Libya, show the White House and State Department were more involved than they first said in the decision to remove an initial CIA assessment that a group with ties to al Qaeda was involved.

On Monday, President Obama said the Benghazi debate a “sideshow,” saying he called the attack a terrorist attack from the very beginning.  Obama said that proves there was no cover-up or any effort to downplay terrorism.  But Rep. Darrell Issa, R-Calif., called Obama’s account "revisionist history." John Bolton, former U.S. ambassador to the U.N., called it "flatly untrue."   "This definitely is a creative rewriting of history," Bolton told Fox News.  It is true Obama referred to ‘acts of terror’ the day after the attack, but one week later he was saying it wasn’t clear the attack was the work of terrorists.

Rep. James Lankford, R- OKC is a member of the U.S. House Oversight Committee, which held a hearing last week on the Benghazi attack.   The witnesses at the hearing were State Department whistleblowers with direct knowledge of the circumstances of the attack.  These four career diplomats have served America in both Democrat and Republican administrations and are probably as close to apolitical as you can get.  All the witnesses were critical of the Obama administration and their unwillingness to provide proper security in not only Benghazi, but also at the official US Libyan embassy in Tripoli.

According to Lankford, the Department of State was actively trying to “normalize” the mission in Libya by drawing down uniformed security forces. State denied several requests by security personnel for increased security. Diplomats on the ground reported active terrorism in the area even as the State Department in Washington withdrew security forces. The hearings also revealed the facility was inadequate for even the most modest attack and there was a lack of preparation or warning systems at the facility.

It is said that those who refuse to learn from history are doomed to repeat it.

Back in 1998, Islamic terrorist attacked American embassies in Tanzania and Kenya with truck bombs.  The two attacks killed 223 people and injured thousands.  The mastermind behind the attacks was Osama bin Laden.  In both the Tanzania and Kenya attacks, The State Department had ignored diplomats on the ground requests for increased security.

Interestingly even the liberal news media is now asking questions about the Benghazi attacks, particularly the roll of former Secretary of State Hillary Clinton.  Back in January at a Senate hearing, Clinton yelled at Senator Ron Johnson after he asked if the attack was a terrorist attack or just a protest; “What difference at this point does it make?” Clinton yelled at Johnson.  It makes a lot of difference.  If the attack in Benghazi was a terrorist attack, there is significant documentation between the diplomatic team on the ground and top leaders in The State Department asking for more security and warming of a possible terrorist attack.  Those requests and warnings were ignored and Americans lost their lives.
Posted by Steve Fair is a Jelly Salesman. at 8:18 PM