Bill of Rights came from God! 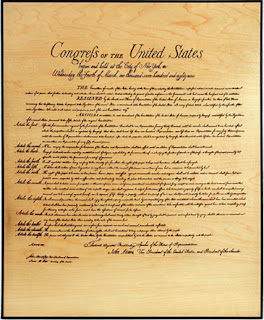 BILL OF RIGHTS CAME FROM GOD!
by Steve Fair
Sunday December 15th was the 222nd anniversary of the adoption of the Bill of Rights.  The Bill of Rights is the name give to the first ten(10) amendments to the U.S. Constitution.  In 1789, twelve amendments were introduced by then Congressman James Madison to the 1st US Congress as a series of legislative articles. They were adopted by Congress in September of 1789 and eventually ten(10) were ratified by three fourths of the states in 1791.
The Bill of Rights enumerates freedoms not explicitly stated in the main body of the Constitution, such as freedom of religion, freedom of speech, a free press, and free assembly; the right to keep and bear arms; freedom from unreasonable search and seizure, security in personal effects, and freedom from warrants issued without probable cause.
When Madison, who was a Federalist, proposed the Bill of Rights, it was a controversial idea because a majority of the founding fathers had already entertained and rejected the idea of including a Bill of Rights in the original 1787 Constitution. Some of the Federalists(those who wanted a strong national government) also believed the concept bore too much similarity to England’s monarchy.  The Magna Carta, written in 1215, was a concession by King John to grant certain rights to his English subjects.  The Federalist founders wanted our founding document to present the concept of self-rule.  They said the reason was because ‘rights’ were given to man by God.
They also believed the Constitution was the only document that was necessary and called Madison’s amendments, ‘parchment barriers.’  Alexander Hamilton wrote in Federalist Paper #84: “I go further, and affirm that bills of rights, in the sense and to the extent in which they are contended for, are not only unnecessary in the proposed Constitution, but would even be dangerous. They would contain various exceptions to powers not granted; and, on this very account, would afford a colorable pretext to claim more than were granted. For why declare that things shall not be done which there is no power to do?”  Today, it seems almost inconceivable to not have a Bill of Rights, but in the early founding days of our nation, they were a source of controversy.
Why should Americans care about the Bill of Rights?
First, because they enumerate the basic freedoms we have as Americans; rights government can’t take away.  The Bill of Rights are like rules to a game.  You need to know what the rules are for being a citizen in America.  They educate citizens.  They serve to help keep government in check.  While they are not followed as closely by government as they should be, they do provide an effective deterrent to government expansion into our lives.
Secondly, the Bill of Rights are important today because they define what the founders meant when they said "life, liberty, and the pursuit of happiness."  A key phase in the Constitution is ‘unalienable rights.’  The founders were stating our rights, which cannot be taken away by government, originated with God.  But if our rights originated with God, as the founders stated, shouldn’t we find out what He said about government?  Romans 13:1 says Let every soul be subject unto the higher powers. For there is no power but of God: the powers that be are ordained of God.
That simply means President Obama didn’t win two presidential elections by accident- he was placed into office by God.  Hard to grasp for conservatives, but in fact if we believe that God puts leaders in power, we must understand He also controls and governs them.  The most effective lobbying effort a Christian has is not writing and calling his elected officials (which should be done), but when he lobbies God on his knees.
If God puts leaders into power, then we can logically conclude He also ordained the adoption of the Bill of Rights.  We should be grateful and thankful for His provision of these ten amendments.  They came from the hand of an omniscient, sovereign God who knows what we need better than we do.
Posted by Steve Fair is a Jelly Salesman. at 11:58 AM