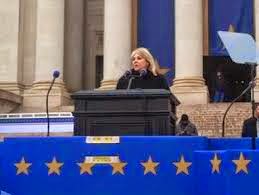 HEALTHY, PRODUCTIVE AND WISE!
by Steve Fair
On Monday, Governor Mary Fallin and eight other statewide elected officials were sworn into office. Six of the statewides were sworn in for their second term.  Here are some observations from the swearing in ceremony.
First, it was cold.  The temperature was below 30 degrees with a wind chill factor in the teens.
Four years ago, when Fallin and the other statewides were sworn in, it was cold and snowy, but Monday’s conditions were worse.  The program progressed smoothly, with just a few glitches, most noticeably the delayed entrance by the Governor.  The attendance was not as high as it was four years ago, which is understandable since all those sworn in with the exception of Todd Hiett (Corporation Commissioner) and Joy Huffmeister (Superintendent of Public Instruction) were being sworn in for their second term.
Second, the Oklahoma Constitution requires Oklahoma Corporation Commissioner’s take a specific oath of office in addition to the one the other statewide officials take.  The long, detailed CC oath always draws a few chuckles from the crowd for the ‘attention to detail’ it outlines for a new Commissioner.  You can see the full oath on the Corporation Commission website.  Obviously the lengthy oath was intended to gain the commitment of the Commissioner to be honest and fair in their dealings on the Commission by including virtually every known entity the Commissioner will interact with.
Third, after taking the oath of office for her second term, Governor Fallin outlined three key areas where she believes the Sooner state needs to improve: education, incarceration, and health.  Let’s look each area individually.
First, Education.  “Education beyond high school is absolutely “the new minimum” for success in the workforce. If we can increase our educational attainment as a state, we will benefit from everything from higher earnings to less crime, less teen pregnancy, and less reliance on government aid, saving taxpayers money,” Fallin said.  According to the American Legislative Exchange Council (ALEC), Oklahoma ranks #41st in the U.S. in education attainment.  ALEC points out Oklahoma’s education ‘policy’ is fairly good and grades it B-, so where is the disconnect?  Why is the policy not producing?  The real issue is Oklahoma’s education dollar is being swallowed up in non-classroom activities.  Oklahoma has over 500 school districts and each of those districts have buildings, buses and administrators.  Over 50% of every dollar allocated for education in Oklahoma goes to a non-classroom related activity.  This has not changed in over 40 years.  That is proof that good policy will never produce good results.  The fundamental infrastructure of Oklahoma education must be addressed.  Oklahoma leaders need to commit to improving education in Oklahoma, but not by just throwing more money at it.
Second, Incarceration.  According to the National Institute of Corrections, Oklahoma’s crime rate is 22% higher than the national average.  Our violent crime rate is 26% higher.  Oklahoma’s incarceration rate is +67% higher than the national average.  Only two states- Mississippi and Louisiana- have higher rates.  Oklahoma has the highest incarceration rate for women in the country.  Fallin said she was committed to working with the legislature to help non-violent offenders get their life back on track.   “Here’s the sad truth: many of our inmates are non-violent offenders with drug abuse and alcohol problems. They don’t need to spend long stints at the state penitentiary, where they can join gangs and acquire criminal networks. They need treatment; they need supervision; and they need to be returned to their communities as sober adults ready to support themselves and their families,” Fallin said.
Third, Health.  According to the United Health Foundation, Oklahoma ranks #46 in the U.S. in overall health.  We have high rates of cancer and heart disease due to smoking. We have high rates of obesity and diabetes.  In her remarks, Fallin set a goal to reduce deaths due to heart disease.  “One of the big indicators of overall health – because it is so closely linked to smoking, obesity, and nutrition – is prevalence of heart disease.  Let’s set an aggressive goal: to reduce heart disease deaths in Oklahoma by 25 percent between now and 2025. If we are successful, and I believe we will be, that alone will save over 2,400 lives every year,” Fallin said.
Fallin concluded her remarks by saying, “Collectively, we should all commit to working together so Oklahoma will be a place where our children and their children can stay and find great opportunities in healthy, strong and safe communities; a place where they can pursue their dreams, get a good education and a good-paying job.”  Amen- now it’s time to go to work and make it happen.
Posted by Steve Fair is a Jelly Salesman. at 2:27 PM